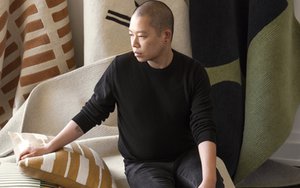 Wayfair says its AllModern brand is teaming up with designer Jason Wu for a limited-edition collection.

“At AllModern, we believe good design should be the standard for all, not a luxury for the few,” says Reena Person, head of AllModern, in the announcement. “Jason Wu exudes this shared belief in everything he designs.”

The announcement comes just a week after Wayfair announced second-quarter financial results that are throwing up some “yellow flags,” writes Seth Basham, an analyst who follows the company for Wedbush Securities.

It’s losing customers and spending much more on attracting new ones.

Wayfair, based in Boston, says its second-quarter net revenues fell to $3.3 billion, down 14.9% from a year ago. In the U.S., sales fell 9.7% to $2.8 billion as consumers shifted their focus away from home as COVID-19 concerns continue to ease. Those results, while a bit better than many had been expecting, signal tough times and weakness ahead, writes Basham.

It posted a net loss increased to $378 million, compared to net income of $131 million in the year-ago period.

Basham now forecasts a 9% decline for Wayfair in the coming quarter. “Wayfair is seeing softening category demand as inflationary pressure and macro/geo-political concerns weigh on consumers’ ability and willingness to spend on discretionary products,” he says. And that’s compounded by consumers shifting away from product spending and more toward experiences.

Wayfair, however, is upbeat about America’s desire to keep making their homes feel homier. Says Niraj Shah, CEO, co-founder and co-chairman, in its announcement. “Consumers remain engaged and responsive to the right combination of wide selection, great deals, and satisfying service.”