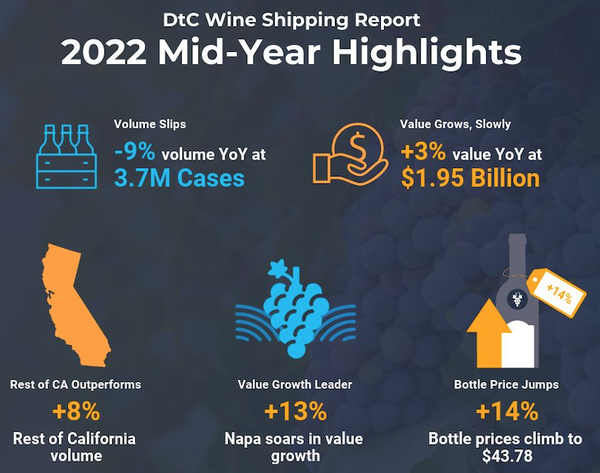 D2C wine shipments are returning to pre-pandemic trends, according to data from Sovos ShipCompliant and Wines Vines Analytics.

In the first half of this year, wine shipments totaled 3.7 million cases—down 9% from the same period in 2021—while their dollar value rose 3% to just shy of $2 billion.

By comparison, shipments climbed 27% in 2020, prompted by pandemic-induced lockdowns.

The overall drop in volume for all sizes of wineries is reflective of a return to in-person and carryout purchases.

California remained the state that produced and shipped the most wine, followed by Texas, Florida, New York and Washington.

In terms of varietals, Cabernet Sauvignon had the largest share of overall sales in the first half, at 29%.

According to Sovos ShipCompliant’s analysis of the first-time buyer data, new customers will typically make about two orders per year.

“Throughout the past two years, wineries have consistently reported that their best D2C sales have come from existing customers rather than chasing new ones,” Adams noted.