ESPN Striking Out On Its Own? With Heavy Hitters, Disney Sees Growth 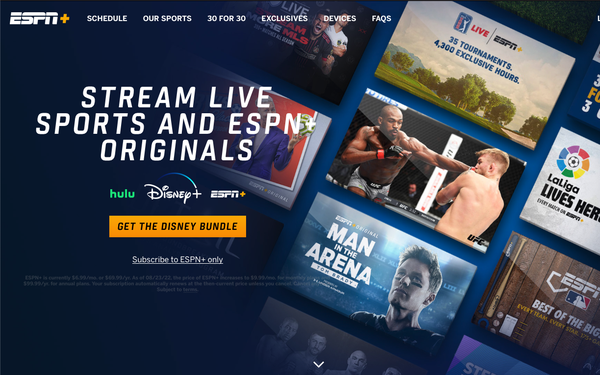 Does ESPN want to make a big player trade -- or continue to play ball with an existing strong lineup?

One activist investor wants to revisit the notion of Walt Disney spinning off its long-time mothership cable TV network group ESPN -- something the company, according to analysts, was considering some years ago when the cord-cutting era began.

Daniel Loeb's Third Point has taken a new stake in Walt Disney, believing the company would do well to sell it off.

But should it really? Recently, Disney raised the monthly price of its growing ESPN+ streaming service by a massive 43% to $9.99 per month from $6.99 per month starting August 23.

This was announced previous to Disney's release of its recent quarterly earnings.

And when those financial results were disclosed last week, Disney said ESPN+ recorded 22.8 million subscribers -- up from 17.1 million at the end of 2021. It is also up 53% year-over-year.

All this would seem to be good news -- especially in the wake of continued cord-cutting that has impacted many linear TV cable networks. ESPN now is estimated to be in 75 million linear TV homes -- continuing its steady, annual mid-single digit-percentage declines.

Let's do some back-of-the-napkin rough math: If you add the two numbers -- streaming and linear TV -- you now have 97 million overall homes. But guess what ESPN's total homes totaled ten years ago, in 2012? According to an ESPN press release back then, the humber was 98.5 million.

All this is to say that Disney has roughly made up immense ground in this department --- perhaps more than any other single U.S. cable TV network in the cord-cutting era. All that is good news. So why sell?

For sure, there is lots of overlap with homes taking both services. Financially, there are other major issues. High-price sports TV rights fees are only going to be higher.

And, of course, there are still big-time start-up costs and expenses that ESPN+ has -- as well other Disney streaming services. For the most recent quarter, Disney posted a total D2C net loss of $1.1 billion.

Analysts wonder whether ESPN+/ESPN, as a smaller media company, would benefit in terms of being quicker to market with new innovative approaches in the streaming world.

Right now, however, all streamers need good teammates -- and a strong bench.