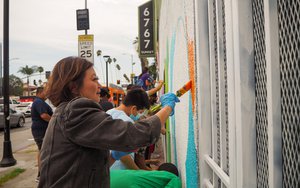 Forever 21, in the midst of a rebranding that draws heavily from Los Angeles' diverse neighborhoods, is getting artsy.

It's linking a new mural campaign to some favorite causes through a partnership with Arts Bridging the Gap and Boys & Girls Clubs of America.

The fast-fashion brand launched a new campaign in May, celebrating "A Little Bit of L.A. In All of Us." That effort, created by The Salon, Campbell Ewald's newly formed cultural consultancy, is still going strong. It focuses on the diverse fashion tastes of Forever 21's shoppers, using L.A.'s diversity as a metaphor.

Winnie Park, CEO of the retailer, says the mural project marks another chapter in its rebranding campaign. "Our new brand position has been well-received from employees to shoppers, and now the murals with the L.A. community are adding more excitement."

The project is called the "Forever LA Mural Collection," and includes partnerships with Arts Bridging the Gap and Boys & Girls Clubs of America. The murals are appearing in such neighborhoods as Hollywood, Korea Town, South LA/Fairfax and Venice.

Park pitched in on the Hollywood project and says the murals "are a permanent part of our hometown…making a blank wall into something beautiful."

Brand awareness for Forever 21 stems mostly from social media. Park tells Marketing Daily via email that images and comments about the murals from influencers and employees are spreading among its Gen Z and millennial audiences.

Kids designed and painted the murals as part of Arts Bridging the Gap's immersive art projects. The nonprofit invites local youth into creative expression sessions, where they define their murals' themes, content and vibe.

Local L.A. artists then use these conversations to transform ideas into a final design, painted in key intersections of the city.

Each mural has a QR code that unlocks a unique Forever LA page, with details about the art, the activation partners and highlights from the painting events.

Forever 21, with more than 570 stores, is owned by a partnership with Simon Property Group and Authentic Brands Group.*