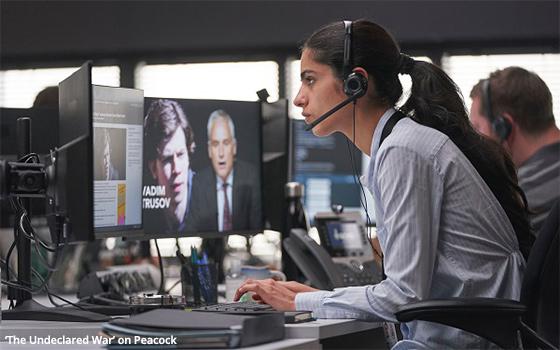 In the event of a devastating cyber attack, start worrying.

That’s the message received from an unsettling new scripted series about just such an attack -- an act of war if there ever was one, if only someone could figure out who launched it.

Without knowing who exactly is responsible, declaring a war is not possible -- at least not in the first episode the TV Blog previewed earlier this week.

Made in the U.K. and aptly titled “The Undeclared War,” the series starts streaming this Thursday on Peacock.

The show starts with the first of what might eventually evolve into multiple attacks on the Internet in Britain. In the first attack seen in the show, much of the Internet crashes, but not all of it.

The attack seems to be aimed mainly at Internet commerce, just about all of which has been put out of commission -- crippling the British economy in the space of 24 hours. Also disabled, at least temporarily: The computer systems of British intelligence.

One of the only sectors of the private (as opposed to public or government) sectors of cyberspace left up and running is social media, which is then deployed to confuse matters even more.

Get the picture? Everything runs on the Internet. Ergo -- crippling the Internet cripples the world.

Indeed, a second attack that is narrowly averted in Episode 1 might have had even worse consequences, since it may have attacked a lot more than e-commerce -- banking, utility systems, the military, government and more.

In response to the attacks, the British prime minister (Adrian Lester) wishes to take decisive action because he is in the middle of an election and the attack has sent his approval ratings plummeting.

The country’s intelligence services advise caution, however, since retaliating against the wrong target could ignite a shooting war.

This is one of the themes of “The Undeclared War.”

Wars that start with physical invasions and bombings are considered wholly justifiable reasons to declare war on the invader.

But in “The Undeclared War,” governments and their military establishments are seen as not yet sure how to respond to a cyber attack that some would say is also an invasion, even if no blood is shed -- at least at first.

In “The Undeclared War,” the response the prime minister proposes is not so much military as electronic. Do unto them what they are doing to us, he seems to be saying, and launch our own cyber attacks.

The show centers somewhat on a young and very green, newly hired cyber analyst (played by Hannah Khalique-Brown, photo above) who is suddenly thrown into cyber-attack emergency mode on her first day of work.

Just to drive the point home that cyber warfare might not be that far away, “The Undeclared War” opens in April 2024.

“The Undeclared War” starts streaming on Thursday, August 18, on Peacock.