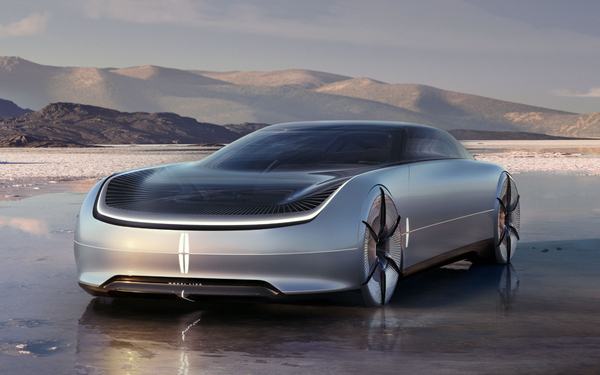 DEARBORN, Michigan —  Ford Motor Co.’s Lincoln brand continues to celebrate its centennial anniversary, but this time with a huge nod to the future.

The highly futuristic vehicle is a glimpse into the brand’s future vision, including how it is reimagining personal mobility.

Concept vehicles allow designers to illustrate how new ideas can come to life with the help of advanced technologies, Niemiec says.

More than 100 members of the Lincoln design team have had a hand in creating the vehicle, which will be on display at the Pebble Beach Concours d’Elegance where the Lincoln is the featured marque as part of the brand’s 100th anniversary. The automaker also created an 80-second video showcasing the vehicle for its social media channels.

This is a vehicle that embodies the brand’s “Quiet Flight” brand ethos, which customers can look to as a sanctuary and someplace to “escape to,” rather than the less positive approach of using a vehicle to “escape from” something else, Niemiec says.

The front end, no longer dominated by a grill, offers a friendly lit up “smile” as the driver walks up to it, Mistry says.

While the interior is opulent, it’s also thoughtful, featuring items like vegan leather and recycled materials for mindful and “conscious” indulgence, Niemiec adds.

The front row seats can be flipped forward to create a living-room-like social setting, in which front passengers can sit across from rear passengers.

A crystal greyhound hood ornament, originally selected by Edsel Ford in the 1920s, symbolizes grace, elegance and speed and is visible through the transparent hood.

Created as an autonomous vehicle with an intelligent driving experience, connectivity and software-driven innovations, the Model L100 Concept advances Lincoln’s vision and paves the way for the brand to rethink mobility in the future, says Joy Falotico, president, Lincoln.

“We are at a special moment in our history,” Falotico says in a release. “Over the last 100 years, Lincoln has pioneered multiple innovations and pushed the boundaries of design that have come to define our brand as we know and love it today. With the Model L100 Concept, we reimagine what the Lincoln sanctuary might look like for our clients of tomorrow, moving us forward to define the next chapter of the Lincoln story.”