Streaming Ads: Relevance Offsets Load -- Up To A Point 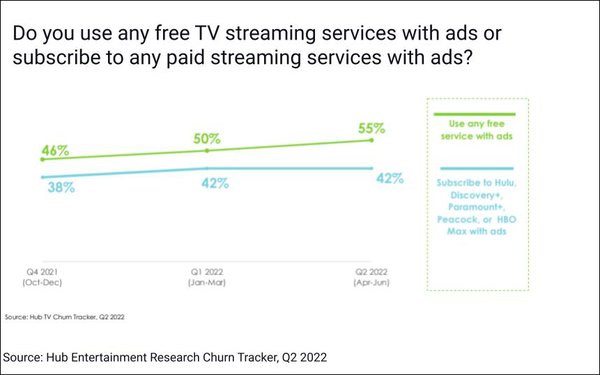 The latest research on ad-supported streaming services brings upbeat news for the concept in general, and particularly marketable findings for the ad-supported tiers of Discovery+, Hulu and Paramount+.

For starters, this new Hub Entertainment Research study on TV advertising — a survey fielded in May among 3,004 U.S. consumers ages 14 to 74 who watch at least one hour of TV per week — confirms significant recent upswings in the uptake of free, ad-supported TV streaming services (FASTs) and cheaper, ad-supported tiers of paid services.

As of Q2, 55% of consumers report using at least one FAST — up nearly 10 points since just the end of last year (above).

Another 42% report subscribing to at least one of the ad-supported tiers like Hulu, Discovery+, Paramount+, Peacock or HBO Max. That a four-point increase since year-end 2021.

The survey also confirms other research indicating viewers’ increasing tendency to say they’d opt for ad-supported services over ad-free if they can save money. 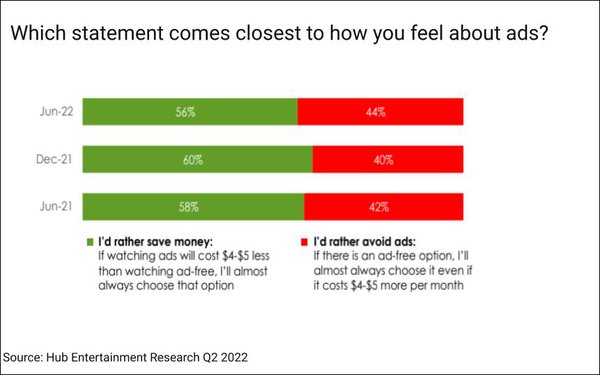 More good news for advertisers: Subscribers to the ad-supported tiers of streaming services are, for the most part, equally likely to feel they get “excellent” or “good” value from the service as those who subscribe to the ad-free versions. In fact, those who subscribe to the ad-supported versions of Discovery+ and Paramount+ are actually five points morelikely than the ad-free subscribers to say the services offer excellent or good value. 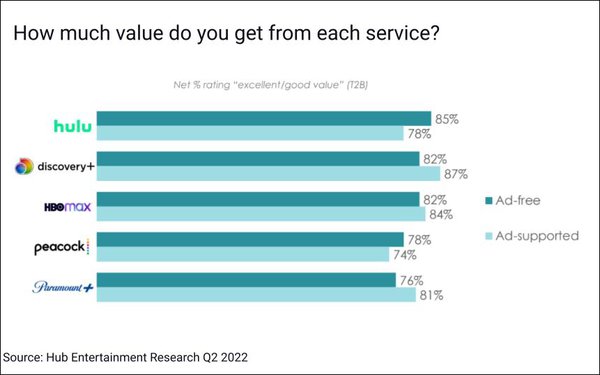 Further, across all of the FASTs included in the survey, strong majorities of FAST users say those services offer good or excellent value. 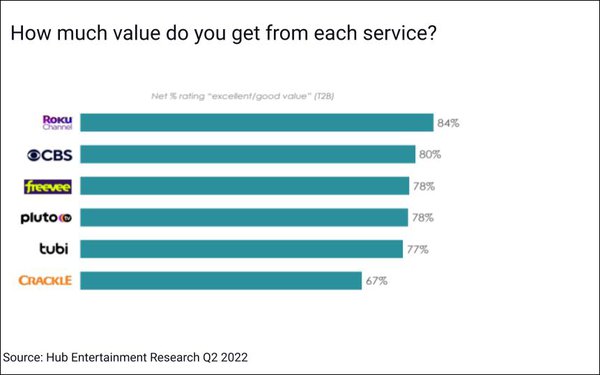 On one hand, asked if they see “a lot more” or “some more” ads on specific services, subscribers to Discovery+ and Hulu are the most likely to agree that they see “more ads” on those platforms than on other streaming platforms. 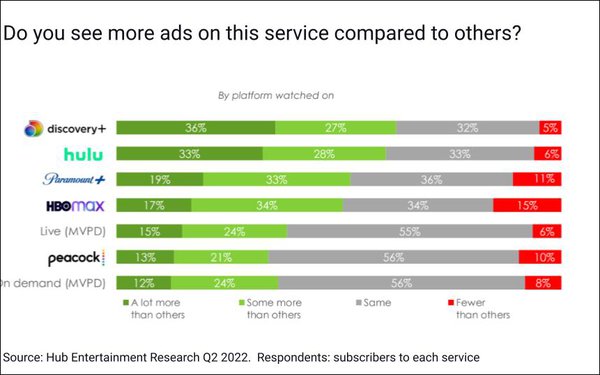 However, despite their perception that the numbers of ads are higher, subscribers to those same two services are also the most likely to feel that the number of ads they see is “reasonable”. 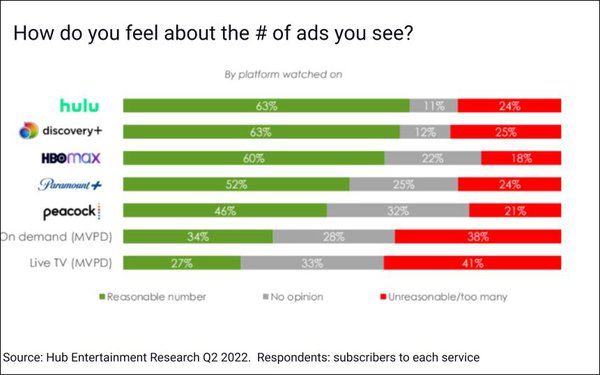 Further, those two services lead the list when consumers are asked how much “attention” they paid to the ads during a show they watched recently on the service. Half (51%) of recent Discovery+ viewers reported top ratings on ad attention (8-10 on a 0-10 scale), as did 45% of recent Hulu viewers. 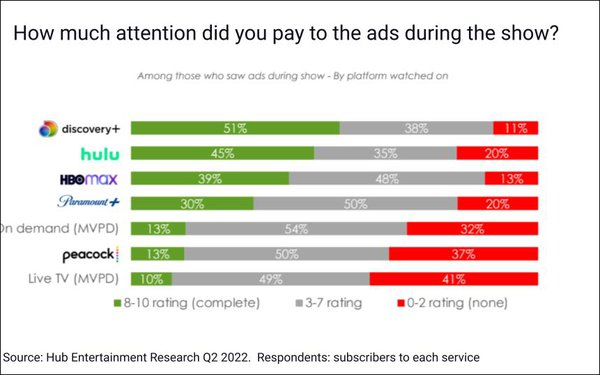 Relevance was found to be the key to keeping viewers satisfied even in a context of relatively high ad loads.

Ad-supported platform viewers were asked if they remembered seeing ads that seemed relevant to their interests. Among those who did remember ads like that, 69% said they enjoyed the entire experience of watching the show. Among those who didn’t see relevant ads, viewing enjoyment was just 48%.

Similarly, show enjoyment was 61% among those who remembered ads for products that seemed to be based on their past purchases, versus 49% among those not seeing ads like that. 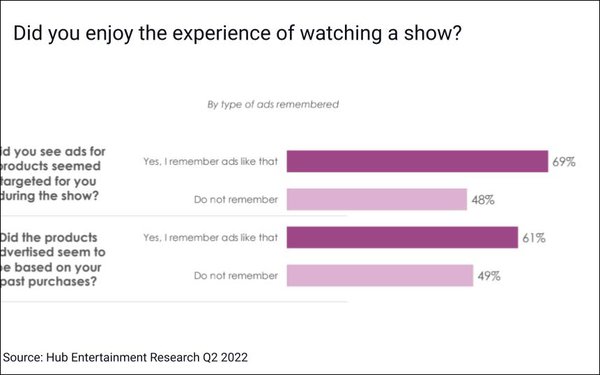 But as you might guess, relevance was found to have definite limitations in the face of excessively frequent or lengthy ads.

Ad-supported service viewers were asked to estimate how many ads they saw during a recent show. Once the number of ads reached six to 10 per half hour, the proportion feeling the ad load was unreasonable began to climb dramatically: from 25% among those recalling five or fewer ads, to 36% for six to 10, to 46% for 11 or more. 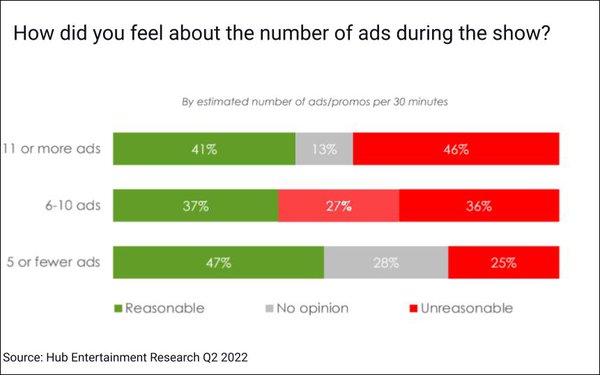 Similarly, perceived unreasonablenessof break length rose steadily after the one-minute mark. A third of those who said breaks were one minute long perceived them as unreasonable, versus 41% of those who estimated that ads were 90 seconds long, versus 48% of those estimating two minutes plus per break. 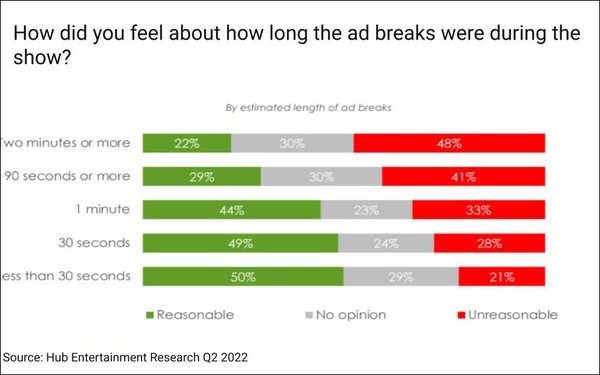