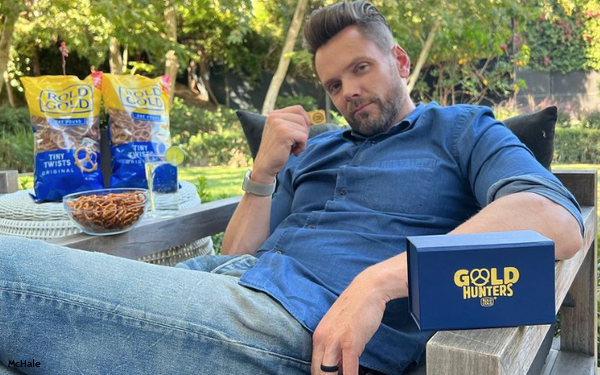 They come together under the banner of “Gold Hunters”—billed as a consumer scavenger hunt to mark 106-year-old Rold Gold’s appearance in classic movies, television sitcoms and sporting events.

The Frito-Lay brand chose actor Joel McHale to kick off the limited-time campaign by posting a clue on digital platforms regarding a movie in which he and Rold Gold both appeared.

People could guess the movie title and post it on social media for the chance to win one of 60, one-ounce gold bars.

“Rold Gold has been a part of snacking occasions for over 100 years, and a part of pop culture for that whole time as well,” John Watts, senior director of marketing at Frito-Lay, tells Marketing Daily.

This month, the campaign appeared on Manhattan streets in the form of mobile out-of-home placements containing more clues and directing people to the brand’s website for contest entries.

“New York has played such a huge role in TV shows and movies for decades. And a lot of those have got Rold Gold in them,” says Watts.

“So we thought there was this crazy intersection between this really iconic geography and iconic, classic pretzel brand.”

The value of each gold bar prize will depend on the market price of gold after the contest ends on Sept. 11.

A billboard on the back of a truck carrying clues and a website URL alternated this month between Manhattan’s Chinatown and the Upper West Side, “where there’s an iconic diner centerpiece from a 90’s sitcom.”

Our guess: Sounds like Tom’s Restaurant from “Seinfeld,” whose George Costanza character was a big fan of Rold Gold.