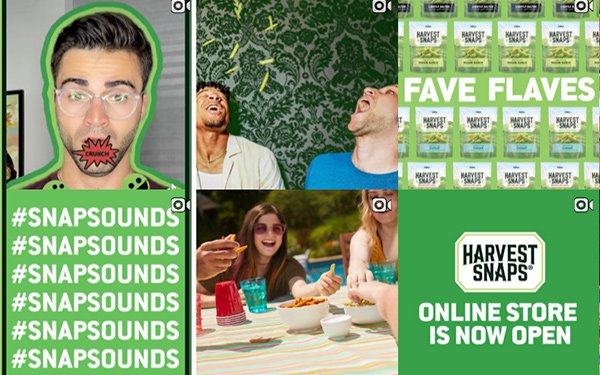 Cutwater has debuted a TikTok activation for Harvest Snaps, aimed at college students.

This is the first work since the agency was named digital AOR on the account in June, as well as Harvest Snaps' initial activation after a rebrand.

The creative brings a music-driven TikTok brand push to the plant-based snack, critical to this demo.

The branded effort, entitled “Snap Sounds,” can be accessed directly through TikTok or by scanning the QR code on the Mixed Snack Pack from Harvest Snaps — six, single-serve bags of veggie snacks in three flavors.

The creative encourages students to create their own music via head movements. Each motion triggers one of six beats, sounds pulled from Harvest products, such as the inevitable snap and crunch.

"Users can jam by themselves and with friends. Vocals, instruments, dance choreography, anything goes. The beauty of the beats is that they create an ownable sonic identity for Harvest Snaps that wasn’t there before,” said Cutwater group creative director Adam Vohlidka.

Cutwater is streaming targeted ads across social channels, as well as influencer partnerships. The latter includes @veryveryvinny, @stavemusicofficial, @andy_morris and more. Paid support will run with nationwide college sampling events for the Mixed Snack Pack, which features limited-time coupons for all Harvest Snaps items. The Mixed Snack Pack will be sold at Sprouts Farmers Market for a limited time starting in mid-August and direct to consumers on HarvestSnaps.com.

Calbee America, Inc.’s head of marketing Sandra Payer, the brand's parent company, adds: “This activation presents a unique opportunity for Harvest Snaps to attract and engage with a younger and relevant target audience of Gen Z college students, often looking for tasty and better-for-you snacks to eat while studying or share with their friends.”