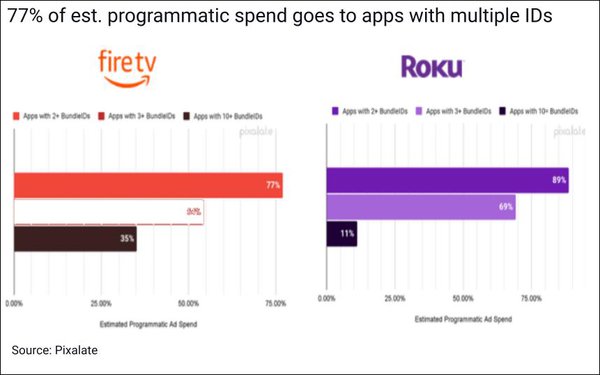 Growing use of unregulated “bundle IDs” to identify the apps on which open programmatic buys are transacted on connnected TV (CTV) is compromising performance and measurability.

That’s according to a new study by CTV and mobile fraud protection, privacy, and compliance analytics platform Pixalate, which is promoting its proprietary mapping solution as a means of tackling the challenge.

Targeting accuracy and measurement for open programmatic on CTV depend on clear identification of the apps on which transactions occur. But unlike App Store IDs generated by the store itself, bundle IDs, which are manually created by CTV platforms, aren’t guaranteed to be unique, explains Pixalate.

This has led to multiple bundle IDs frequently being used to refer to the same app by different entities. That can compromise the ability to bid on desired inventory and target and measure, as well as open opportunities for using the CTV supply chain for ad fraud, warns the company.

Bundle IDs are strings, usually structured in reverse domain notation, created by CTV apps themselves to identify apps. (For instance, com.sling could be used to reference the Sling TV app, or com.hulu to reference the Hulu app.)

Use of bundle IDs originated on iOS and Android mobile apps. As mobile app stores matured, the IDs became unique and were referred to generically as “App Store IDs” (“app bundles” on Android and “bundle IDs” on iOS), Amit Shetty, Pixalate’s vice president of product management, noted in a blog.

But when the concept moved to CTV Apps, creation of bundle IDs was completely left to the discretion of whoever was using them, with each CTV platform having its own App Store ID.

“Since they are manually created, Bundle IDs are not regulated and not guaranteed to be unique,” Shetty writes. “Their structure is dependent on the users following best practices. And unlike App Store IDs, there also is no means to verify their authenticity on app stores.”

In addition, “many fraud detection solutions incorrectly mark these impressions as ‘spoofed’ due to their inability to differentiate between incorrectly set up Bundle IDs as opposed to actual spoofing attempts,” he says. “This makes it difficult, if not impossible, to correctly measure CTV impressions unless a mapping solution, like the one developed by Pixalate, is used.”

Pixalate conducted a study of CTV transactions between June and August 2022 to assess the scale of variations in CTV bundle IDs.

The analysis found that under 5% of Roku CTV open programmatic traffic and under 25% of Fire TV traffic uses the more reliable App Store IDs. 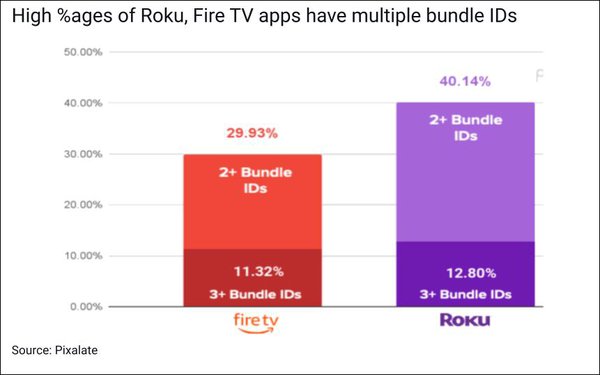 More than three quarters (77%) of estimated programmatic app spend in Fire TV apps and 89% of such spend in Roku apps goes to apps that have two or more bundle IDs (chart top of page).

A third of all ad spend on Amazon CTV apps and 11% of spend on Roku CTV apps go to apps referred to by more than 10 bundle IDs.

Many channel aggregator or multichannel video programming distributors (MVPD) apps have an even larger number of bundle IDs associated with them — some into the hundreds or even over 1,000—because they opt to add channel, network or even name-of-show information to their bundle IDs.