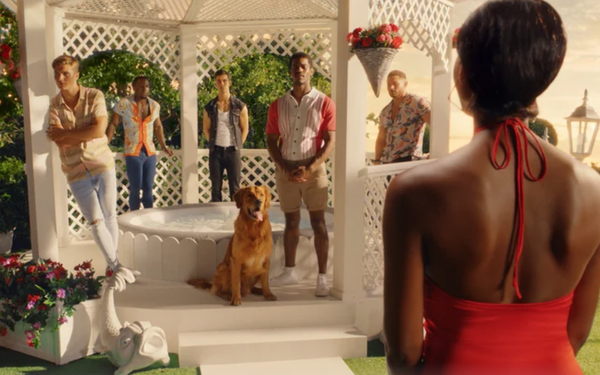 The 30-second spot, "Less Fake Love, More Dog," plays up the brand’s commitment to bring authentic love between dogs and their humans to everyone, everywhere, all the time.

It will air on a variety of channels including its debut Sept. 20 during ABC’s "The Bachelorette" finale, as well as on NBC’s "Today Show" this Friday.

The effort, from PSOne, a bespoke agency for The J.M. Smucker Company, also includes posts on the brand’s social media including TikTok, Facebook and Instagram.

"Milk-Bone is always there to celebrate the simple awesomeness of dog life,” Thomas says in a release. “We recognize and celebrate the special bond between dogs and their humans.”

The campaign was shot by veteran director, and dog lover, Ulf Johannson who is known for his comedy. He put dogs first in every aspect of the shoot. The more than 25 dogs featured were put through a month-long preparation that included training sessions, play dates and chemistry hangouts to ensure they were a great fit and comfortable with their human counterparts, Thomas says.

The campaign gives Milk-Bone, a brand that's been around for over a century, a fresh point of view, says Erica Roberts, chief creative officer, BBH USA.

"We're positioning the iconic treats and the dog/human together time they create as the antidote to this crazy overstimulated, overly connected, overly fake world we all live in,” Roberts says in a release, “Because Milk-Bone believes life would be simpler and more joyful if we had less of all that BS and More Dog. Hard to argue with that. Unless you're a cat person."