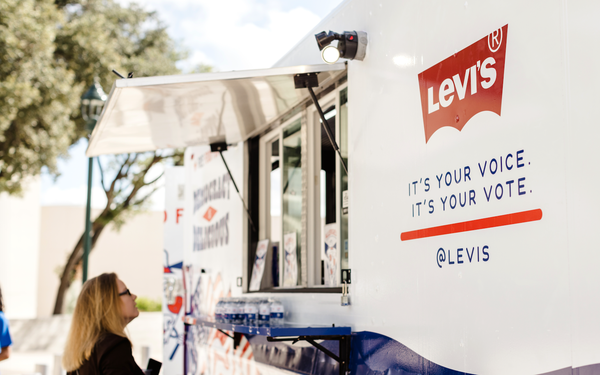 Photo credit: Pizza to the Polls

With November elections closing in, Patagonia, Levi's and REI are among the thousands of companies intensifying their efforts to boost voter turnout.

That includes time off for voting. Time To Vote, a business-led effort, aims to encourage companies to make voting easier for employees. The all-volunteer initiative is "close to crossing that 2,000-company mark," says Corley Kenna, head of communications for Patagonia. "And that's wild because when we started back in 2018, we hoped to get maybe 30 companies on board."

REI announced it would delay store openings by two hours on Election Day, enabling employees to vote. And as part of its "Your Vote Can't Wait" campaign, the co-op built a hub for employees and members with registration resources. REI says the move stems from employee feedback urging the co-op to do more to speak out on important issues.

Levi Strauss & Co., a co-founder of Time to Vote, is rolling a voter-registration campaign onto 150 community college campuses. It says the nonpartisan effort "complements the company's broader efforts to reduce obstacles to civic participation."

The San Francisco-based denim brand says that while community colleges account for just over 40% of American undergraduates, they are less likely to register and vote.

The effort includes "adopting" a community college in Florida and Texas and working with nonprofit partners. Along with Pizza to the Polls, Levi's is delivering food to more than 30 colleges for the events.

Gen Z is also a key focus for Patagonia, along with the business and the Patagonia community.

Time to Vote, volunteer-run and without a budget, "is amazing," Kenna says. "The central premise is that CEOs have a way to reach their employees, unlike any candidate or campaign ever will. By encouraging them to learn the ballot and have time to vote, they can make a difference in voter turnout."

Even if millions of people vote early in person or through absentee ballots, as in the past several elections, time off on Election Day is still essential.

“We’re encouraging the Patagonia community, to get more involved," says Kenna, That group includes employees, customers and members of environmental groups. "We've done a lot of research, and we know they're pretty reliable -- and educated -- voters. So we're asking them not just to go vote, but to volunteer."

Patagonia began closing its stores for the entire Election Day in 2016.

Resources on its website steer citizens to ways to help, including Power to the Polls, which connects people to volunteer opportunities at their local polling places.

Kenna says the apparel brand’s emphasis is on engaging Gen Z, a cohort that is deeply concerned about the climate crisis.

"They are unlike any other demographic, and poll after poll has shown us how much they care. So we're pushing them to register and to vote this cycle."

Patagonia is also partnering with groups like My School Vote and Rise, "with a media strategy to encourage them to vote."