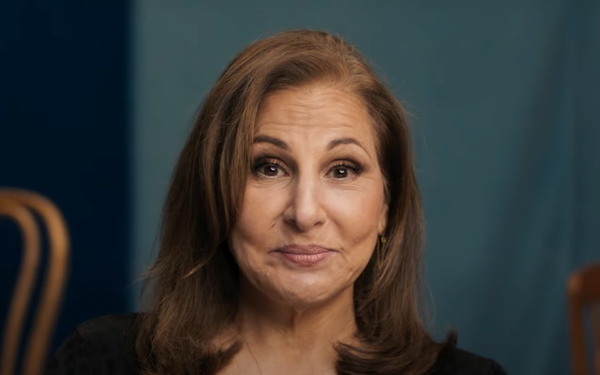 In a new campaign for the National Abortion Federation, actress Kathy Najimy talks about having an abortion, reminding women they have the right to decide to end a pregnancy.

The effort aims to raise awareness for the organization's hotline, the largest national multilingual resource. Themed #ItsYourCall, ads feature Najimy and a group of women, each explaining why abortion was the right choice for them.

The effort started when Meryl Draper, co-founder and CEO of Quirk Creative, put out a call for brand-side marketers, agency owners and freelancers, matching them to nonprofits in the reproductive freedom space. When she found out about the NAF's urgent need to raise awareness for the hotline, she put together a team of agency partners.

"I had the program and the organization to find those partners, and NAF had the need. It was a match made in heaven," Draper tells Marketing Daily.

Like any efforts supporting abortion access, she says the landscape -- with states constantly passing new bans -- is challenging. "The laws are changing every day," she says. In some states, helping women access is illegal. "So, is there a possibility of a lawsuit from creating and running an ad like this? We're not very sure."

The team put together five concepts, ultimately deciding on Najimy and other women telling their stories. "Given that people's lives are at risk, we thought the most powerful way forward was featuring people willing to go on camera and talk about their experiences," says Drape.

Including Najimy, best known for her role in "Hocus Pocus," "makes the creative stronger overall because she is such a recognizable face. It's saying that this is an experience all people go through, even people with celebrity status."

Rather than asking for donations, ads simply remind women that there are many reasons to choose an abortion and that ultimately, "It's your call."

The real-person storytelling approach is widespread in other reproductive healthcare campaigns and many efforts to reduce stigma, from addiction to transgender rights.

Draper doesn't think that reduces its impact. "I don't think authenticity stops being an arresting way to communicate. It's a vehicle that never goes out of style."

Working with Apollo Partners, the group secured high-impact mobile placements with Kargo, a newsletter placement in the Betches SUP newsletter, and OOH placements through Project X Media. Hoping to generate five million impressions, the group estimates the value of donated media so far at $105,000,

Other agency partners include AdTechCares and InMobi, which are sourcing and donating media inventory, Obviously, which is handling social media activation, and Thread Creative, which developed the campaign's messaging.