Automotive TV Spending Down 22% In September 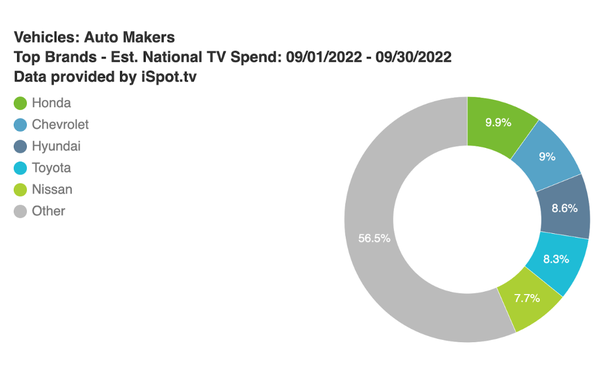 Automakers spent an estimated 22% less in September on national TV compared to the same period a year ago, according to iSpot.tv.

Honda aired 22 times more national TV ads year-over-year in September, which is part of the larger spend number (both relative to its peers and its own estimated national TV ad spend a year ago).

Chevrolet, meanwhile, spent 10% less year-over-year, but made college football a larger part of its September ad buy, up from 0.55% to 2.84%.

Hyundai was focused on NBC, which accounted for nearly 76% of its September spend due in very large part to the NFL (almost 85% of Hyundai’s NBC spend was allocated toward "Sunday Night Football" and "Football Night In America").

GMC’s increase comes in large part due to the NFL, as it spent nearly three times more during games this September compared to a year-ago.

Acura doubled its NFL spend year-over-year, but also focused on Bravo's "The Real Housewives of Atlanta" (No. 2 by spend for the brand after Acura did not buy national linear ads during the show last September).

Football’s return means automakers are relying on NFL and college games for reach once again. In September 2022, 23% of auto brand TV ad impressions are delivered by NFL and college football games, versus 17.8% in Sept. 2021.

“Creatives around new 2023 vehicle inventory took center stage for many auto brands, while others leaned on broader brand messaging to attract potential customers on the promise of both present and future innovation,” Schwartzapfel tells Marketing Daily.

Sunday Night Football helps guide NBC to the top, accounting for over 47% of automaker TV ad impressions on the network (up from 38% the previous year).

The NFL delivers nearly 41% of automaker TV ad impressions on FOX as well, while college football makes up 46.1% on ESPN.

Tennis (and retiring superstar Serena Williams, in particular) is also a boost for ESPN, as the U.S. Open contributes 7.5% of automaker impressions on the network in September, compared to 3.1% last year.