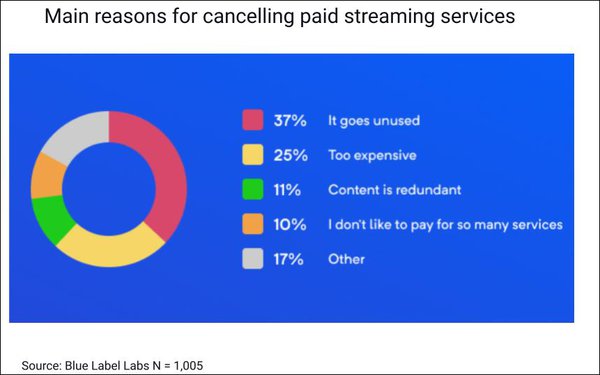 Nearly two out of three North American consumers (65%) report having cancelled at least one subscription-based video-on-demand service (SVOD) subscription in the past 12 months, finds a new survey on video streaming behaviors.

The survey of 1,005 people between the ages of 15 and 67 (51% female, 48% male, 1% nonbinary) was conducted by the Blue Label Labs app development agency between May and August 2022 using the Survey Sparrow platform. The average age of respondents was fairly young, at 28. (More on methodology here.)

Among those who said they'd cancelled a sub during the period, Amazon Prime Video was cited by 9.5%, closely followed by Netflix (8.6%) and Disney+ (8.6%).

More than a third (37.4%) report cancelling because a service was going unused. But cost reasons added up to about the same proportion: 25.9% said the service was too expensive, and another 10% said they “don’t like to pay for so many services.” Eleven percent said the service’s content was redundant with others they have, while 17% cited other reasons.

The volume of transactions it takes to maintain several streaming subscriptions, as well as cost, may be contributing to a perception of having “too many” services, the report notes.

In fact, 53.4%, on average, report being happy with the amounts they’re spending monthly for all services combined. 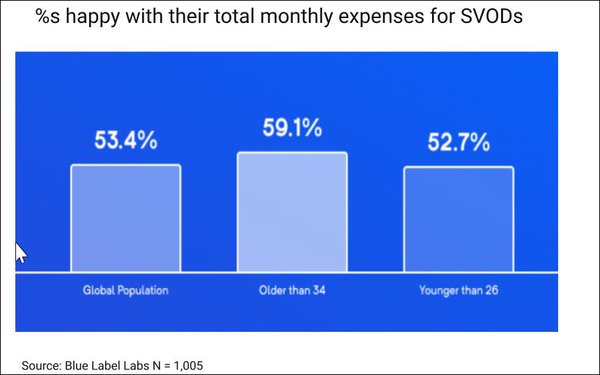 Gen X is the generation most accepting of ads in exchange for lower prices (62%) — perhaps, speculates the report, because the “MTV Generation” is so accustomed to the ubiquity of ads. “This could use further study,” notes the report.

The most popular digital alternatives to watching paid streaming services offer content quite different than that of the major SVODs: YouTube’s free version (22.4% of total respondents), and the highly interactive social platforms Instagram (17.5%) and TikTok (14.2%).

Video games are more popular than TikTok among men. (Just 5% of women cite video games as an SVOD alternative.) In addition, 11% of men, and 7% of women, cited Twitch as an alterative. 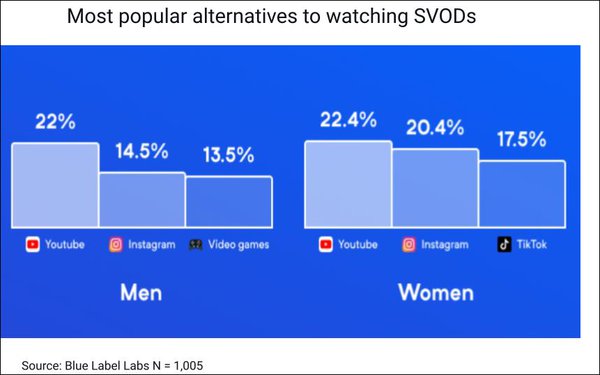