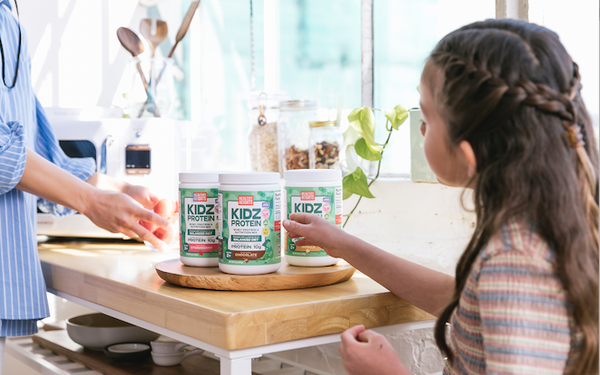 This year’s U.S. infant formula shortage has provided a silver lining not only for overseas formula brands but toddler beverages.

A case in point is the KidzProtein line from Nutritional Growth Solutions Inc. North America and its debut on-shelf at 409 Walmart stores.

The first product was Grow Daily—formulated for kids ages 3-9—followed last October by the launch of Grow Daily Boys serving the 10-14 age bracket.

Which is where the infant formula shortage and its silver lining comes in.

“The interesting thing that it created for us is it affected everything from infant formula through toddler beverages and conventional feeding products for young kids,” Nutritional Growth president Steve Turner tells Marketing Daily.

“That whole aisle has been decimated with a lot of vacancies. So it gives us the ability to start building awareness in an aisle that shops very frequently. We get a lot of foot traffic and visibility.”

One key differentiator for KidzProtein—two SKUs of which are in Walmart—is that it’s prepared with water in small serving sizes.

“Every other product in the marketplace mixes with milk, and that’s how they get protein on their label,” says Turner.

“It’s suitable for small tummies to be able to finish it and still be able to eat their mac and cheese or chicken nuggets.”

Nutritional Growth has used paid media on Google, social platforms, Amazon and LinkedIn along with podcasts and influencer relationships to generate awareness and trial.

As previously reported, a product recall by Abbott Laboratories that was intensified by storm damage to the company’s plant in Michigan led to widespread shortages of infant formula.

That prompted the U.S. Food and Drug Administration to loosen its restrictions on formulas produced overseas that have recently entered the U.S. market.