Handicapping The Battle Of The Titans 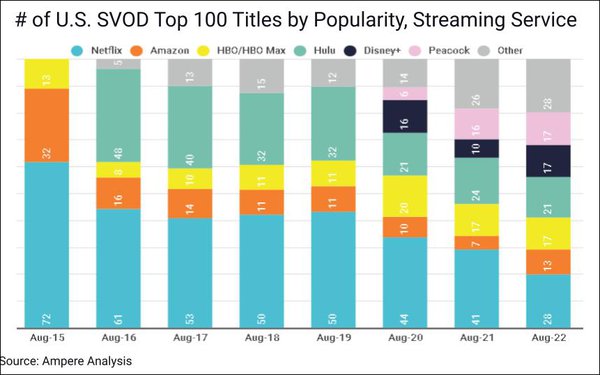 As pretty much everyone knows by now, Netflix yesterday amped up the already intense focus on the coming battle between its own new ad-supported tier and Disney+’s by announcing that its launch will take place in early November rather than early 2023 — a month before Disney’s Dec. 8 launch.

But neither or both of those tactics will necessarily give Netflix a definitive edge in attracting more consumers or more advertising.

What makes this battle of the titans so intriguing is that there are so many variables involved, including relatively unknowable ones like how many breakout hits each will have in their first months and first year.

Of course, with these low per-month fees, the odds are that large numbers of consumers will sign up for both of these ad-supported services, particularly given the current inflationary environment. In that respect, the timing couldn’t be better. But the flip side is that, particularly in the saturated North American market, the preponderance of subscribers are likely to be defectors from the existing no-ads tiers.

Both companies undoubtedly used every test and prediction tool at their disposal to determine likely outcomes and draw up their game plans. But we’re not privy to those.

And since what really matters in the long run is, as always, profitability, it’s all going to come down to whether they manage to make enough incremental revenue on advertising and actually new — as opposed to cannibalized from no-ads services — subscribers than is lost as a result of the cannabilization and the presumably heightened costs of marketing, at least initially. Netflix is reportedly telling advertisers that it expects to get a modest 500,000 subscribers for the ad-supported video-on-demand (AVOD) option, though it’s not clear if those are strictly new-to-Netflix households.

All of this may not be that difficult a calculation for such sophisticated companies — though there’s always the chance that key macro circumstances, or consumers’ or competitors’ behaviors, don’t play out as expected. Advertisers are already reducing even video budgets, and if the economy were to go into a prolonged, severe recession, might many consumers drop even inexpensive AVODs and stick to FASTs?

Unlikely? Let’s hope so. But let's also not forget that the same totally unexpected pandemic that drove the boom for OTT streaming also played a big part in killing the short-form video service Quibi within a few short months.

So we can read analysts’ knowledgeable forecasts, but it will take more than one or two quarters to see the real, bottom-line impacts of these new ad-supported versions.

While we’re waiting, it’s only natural to engage in trying to handicap the players. A few points along those lines:

Disney will have the advantage of marketing a with-ads bundle of Disney+ and Hulu for just $9.99, though it can’t fully capitalize on that until it acquires the rest of Hulu. Netflix still has the larger global subscription base, and is investing heavily to build out free-with-subscription, no-ads games to attract the younger generations, in particular. But it’s also in the very tricky process of forcing password sharers to pay for the service.

On the advertising front, some big advertisers told Business Insider that they’re more impressed with Disney+’s offering. For starters, Disney is reportedly seeking a $50 CPM and $2 million commitment from advertisers, versus Netflix’s $60 to $65 CPM and $20-million commitment asks. (The services themselves have not publicly commented on their pricing.)

Disney+ also has a well-established ad sales team, led by Rita Ferro, that provides streamlined contact for access to the inventory for both Disney+ and Hulu’s more general entertainment content, note the buyers. Not to mention an existing, sophisticated advertising infrastructure and measurement capabilities.

Netflix has been pushing hard to pull all the pieces together within a matter of a few months. It’s been building an ad sales team from scratch, albeit headed by seasoned professionals Peter Naylor and Jeremi Gorman. Some have noted that Microsoft, now owner of Netflix’s ad-tech partner, Xandr, is relatively inexperienced in video. And until yesterday, when Netflix announced that Nielsen will be its measurement partner, it looked like there would be no third-party measurement. That may be in response to pressure from advertisers or would-be advertisers, and there isn’t much time to get it in place and functioning seamlessly.

On the other hand, advertisers have been dying to use Netflix for many years, and Netflix reports that “hundreds” have already signed up, and its inventory is nearly sold out.

Meanwhile, on the content front, Disney took steps to tackle its family-oriented limitations by broadening Disney+’s offerings with more adult fare, and the ability to bundle with Hulu also helps expand its prospect universe, and likely its retention rates.

To its credit, in fact, Disney has succeeded in coming up from behind to match and in some ways surpass Netflix.

Another finds that Disney+ and Hulu, along with other rivals such as HBO Max and Peacock, have been catching up to Netflix in terms of hit releases, as Netflix’s share has been impacted by fragmentation and the loss of many popular series as entertainment companies reclaim their assets for their own streamers.

From holding a 72% share of the 100 most popular SVOD titles in the U.S. as of August 2015, Netflix has seen a steady decline in the last seven years (chart above).

Ampere’s Popularity Score, which measures online engagement with individual titles, indicates that as of August 2022, Netflix’s share had fallen to 28% of the top 100 U.S. SVOD titles — the lowest in the company’s history.

While Netflix still has a higher share of the top 100 than any other single SVOD platform and boasted five of the top 10 most popular titles in August 2022, its share is now within 15 percentage points of competitors including HBO Max (17%) and Peacock (18%). Disney+ (about 17%) and Hulu (20%) combined exceed Netflix, with a 37% share.