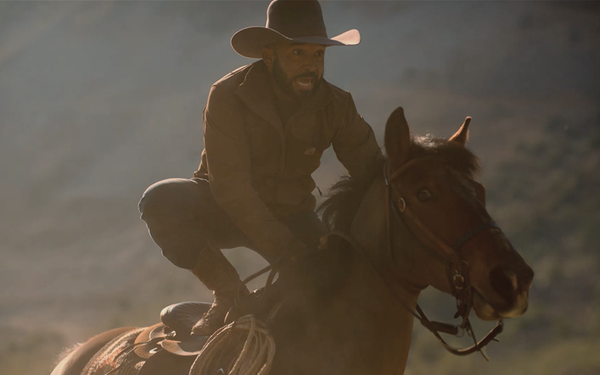 Carhartt knows its fans take work clothes very seriously. And over the last few years, messages to its core audiences have been on the somber side as blue-collar America wrestled with worker shortages, front-line risks and overloaded mothers.

But with its new “Make It Happen” campaign, the 133-year-old brand is going for a different mood, celebrating the joy people feel about their work.

“We’ve addressed some serious issues in the last few years because we needed to,” says Brian Bennett, vice president and executive creative director for the Dearborn, Michigan-based company. “The last few years have been rough, and we needed to talk about it. We decided it was time to lighten up.”

In the spot that’s the campaign's centerpiece, a couple leaps out of bed, eager to hit the ground running. And they continue to bound through their day, springing from one rugged world to the next via I-beams, horsebacks and ladders.

Bennett says that the spirit of “getting sh*t done” defines the audience. “They may not actually jump out of bed, but they do, metaphorically. They don’t sit still. And this campaign celebrates that.”

The campaign is the latest iteration in the “Fit for the next frontier” effort introduced last fall, showcasing many newer blue-collar jobs, such as solar technicians.

The new creative is running on Carhartt’s website and social channels, as well as on digital, social media and connected and streaming TV channels. It’s also scheduled to run alongside the premiere of the “Yellowstone” prequel “1923” on Paramount+.

“This campaign includes 48 different pieces, and we’re so proud of that,” he tells Marketing Daily. “If you’re a cowboy, that’s the content you’ll see. And if you work in the city, you’re more likely to get served a six-second video of our mural painter.”

Short video is a core component. While the brand has had success with longer films, this effort consciously created plenty of fun moments for TikTok in ways that will appeal to the creativity of its younger audiences.

“This next generation of workers has grown up shooting beautiful videos on their phones. They like seeing people jump on and off horses, and they know women can weld,” Bennett says. And while the brand speaks to its audience primarily about work clothes, “we know they’re creative and making things all the time. They’re very enthusiastic -- and they do lots of things.”