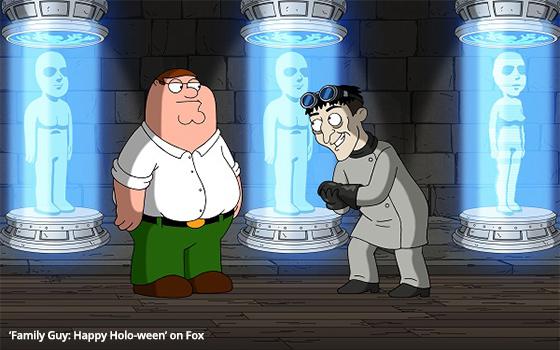 Commercials for Untuckit shirts get skewered Sunday night on a Halloween episode of “Family Guy” on Fox.

In the show, the Griffins are seen strolling through a local Halloween attraction when they encounter one of the attractions identified on a sign as The House of Unskippable Podcast Ads.

Inside, the family is sitting around a table and mom Lois is the first to express her agony when she discovers that skipping an Untuckit ad is impossible to do.

We then hear the fictional commercial, during which the unseen "storyteller" of the spot is relating how he discovered these made-to-be-untucked shirts when seeing one at a party and then searching for them later online.

Says he, "I went home and pinged Untuckit on my Microsoft surface."

This line of ad copy drew this anguished reaction from Chris Griffin: "Is this a promotion within a promotion??"

The comedy here lies in the fact that Chris would not ordinarily be expected to know anything about advertising -- much less have enough knowledge about it to decry the use of a promotion within a promotion (not that there’s anything wrong with that).

Other people and subjects targeted in the episode of this series that has been around for 23 years include Pauly Shore, QAnon, and the frustrations of calling customer service on the phone -- a subject everyone can relate to.

The main storyline of the episode, titled "Family Guy: Happy Holo-ween," involves dad Peter’s decision to have a hologram made of himself that he can command to do whatever he wants it to do.

And what he wants it to do is have the holographic Peter stand in for him as husband and father for the Griffin family while he, Peter, goes out to get drunk with his friends.

Since the show is a Halloween episode, Peter’s plan has unexpected and potentially lethal consequences.

Viewing tip: Look for split-second appearances by two iconic characters from the world of prime-time animation.

This “Family Guy” Halloween-themed episode airs on the same night (Sunday, the day before Halloween) as the "Simpsons" annual "Treehouse of Horror" Halloween anthology special.

Peter’s plan to turn himself into a hologram echoes one of the stories in the "Simpsons" episode in which the entire Simpson family are also not human, but advanced robots inspired by the robots in “Westworld.”

With their longevity, consistency and uncanny ability to comment on aspects of our modern life with pinpoint accuracy, both "The Simpsons" and "Family Guy" are both "hallowed" shows, as in "Halloween."