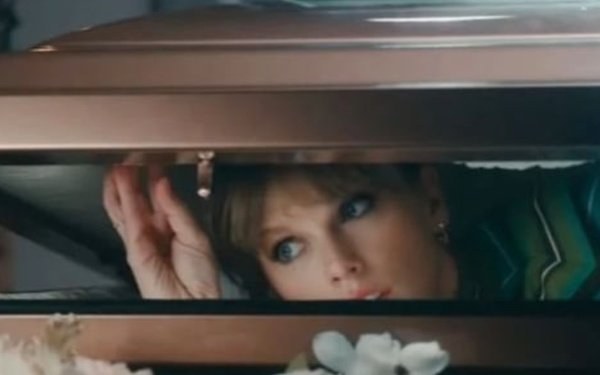 Hours after popstar Taylor Swift’s new “Anti-Hero” music video dropped, the crew at Titan Casket got the marketing shock of their lives.

In one scene -- a very long one -- Swift emerges from a casket. “And it turns out to be one of our Orion series, in copper -- a very traditional casket and one of our most popular,” says Joshua Siegel, co-founder and chief operating officer of the D2C coffin company.

Siegel says the company often gets requests from production companies that need caskets for a shoot, and this order had been back in July.

“We knew it was for a music video, but we had no idea who it was for.”

The video includes a two-minute sketch, taking place at Swift’s funeral. The attendees -- her imaginary grown-up children -- sit in front of the coffin. Taylor eventually cracks open the top of the casket and climbs out, watching the ensuing catfight in horror.

Swift’s fans, obsessed with every detail of every Swift move, wanted to know more. As close-ups of the coffin went viral, Titan chimed in on the Twitter conversation.

It quickly confirmed that it was the source of the casket, and introduced itself, dropping a little funeral knowledge on Swift’s fans. Predominantly 18 to 24, they are not exactly its target market.

“We are really nice, and our mission is to help save families 50% on a casket price by offering options outside of funeral homes,” the brand tweeted. “Funeral homes are legally mandated to accept 3rd party caskets, per the FTC's funeral rule. Have a nice day!”

“Anti-Hero” is on Swift’s new “Midnights” album. Swift wrote and directed the video herself, and is tweeting pictures of herself inside the coffin on social media.

Siegel tells D2C Insider that the Swift surprise came just one day after another banner moment for the brand, speaking to the Federal Trade Commission to expand the “Funeral Rule.”

Since the 1980s, funeral homes have been required to accept third-party caskets. Titan and others are pushing to expand that rule, to require funeral homes to provide pricing information to consumers online or via email, giving them the chance shop around.

The FTC voted four to zero to review and consider changes, which would increase pricing transparency.

Siegel says two large manufacturers control 85% of production. And only 1% of people know that they have the right to buy coffins beyond those offered in funeral homes.

Titan, based in Seattle and still in start-up mode, is in the midst of figuring out the best approach to marketing. The Swift video will help.

In addition to raising financing and adding warehouses, the company has begun hiring a marketing team to help with growth.

“We can’t advertise in the same way other D2C companies do. Nobody wants to see a casket if they don’t need it,” Siegel says. “And there is a very long path to purchase. People may learn about us, but they don’t have need. So for us, it's about a slow, consistent use of different traditional channels.”

The company is also working on a preplanning program, enabling people to put funds toward a casket, locking it in at current prices. That appeals to consumers not just because of the ability to personalize a casket, but also protect their family from overspending.

Titan is also continuing its B2B efforts, working with “death doulas,” who help families through the funeral and grief processes, as well as funeral directors.

But that group is still resistant to the idea of consumers buying caskets without their involvement.

“There are some who are more progressive, but the numbers we work with are small -- we’re still in the low triple digits.”

The company is also the largest casket seller on Amazon, and sells its products at Walmart, Sam's Club and Costco. Oversized caskets, as well as military coffins, are among its best-sellers.