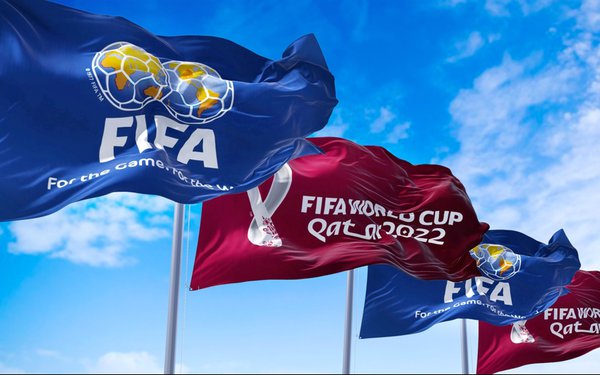 The 2022 World Cup is scheduled to run from November 20th till December 18th. The tournament was moved from its usual June/July slot because of the intense summer heat in host-country Qatar.

The temperature, however, is not the only heat surrounding the tournament. Human rights abuses by the firms building the stadiums and infrastructure to host the event have gotten as much, if not more, coverage than the qualifying matches that lead up to the tournament. Qatar's laws against homosexuality are also creating tension at a time when World Soccer is trying to become more inclusive.

These controversies, however, do not appear to have diminished fans' interest in the quadrennial event, especially here in the U.S., with athletes returning to the tournament after failing to qualify in 2018. This, along with an overall increase in interest in soccer in the U.S., will likely result in strong viewership.

To gauge interest in the tournament and measure how the controversies might affect viewers' opinions of sponsors, we conducted a nationally representative survey of 1,550 respondents. We found that 44% of U.S. adults are either somewhat or very likely to view at least some matches. This is an improvement over the last time the U.S. qualified for the tournament, when 37% of respondents in our 2014 survey said they would be watching. This data was used to create audiences across all major DSPs via ThinkNow Audiences and enables digital marketers to tap into this once every four-year opportunity to connect with World Cup Fans in the U.S. 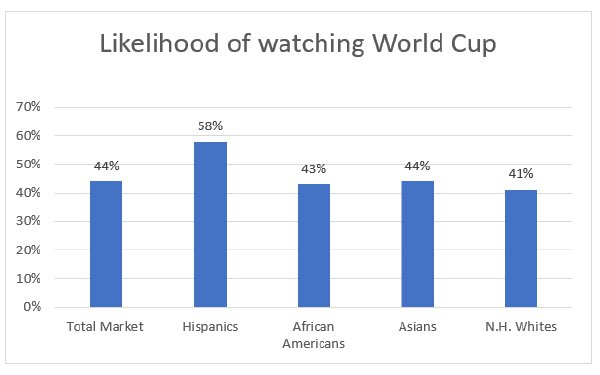 As usual, Hispanics are the most likely to say they will tune in. Mexico's national team, Argentina, Ecuador, Uruguay, Costa Rica, and (technically not Hispanic) Brazil, will be playing in the tournament. Those teams, along with Team USA, are expected to draw Hispanic viewers who would like to see the FIFA World Cup Trophy return to the Americas.

Forty percent of Millennials are soccer fans. They are twice as likely to be a soccer fan than Gen X and 25% more likely than Gen Z. Major league soccer matches in Atlanta, Seattle and Cincinnati regularly draw larger crowds than baseball games. Millennials are also the age group most likely to watch the World Cup. 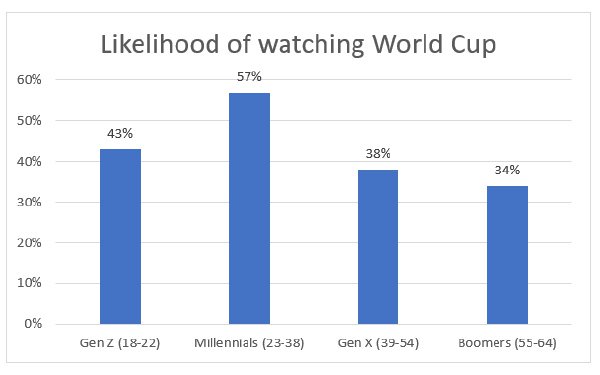 When asked how they plan to watch, streaming edges out broadcast television by 52% to 48%. This holds true across racial groups, except for Hispanics who are slightly more likely to view on T.V. (56% vs 54%). 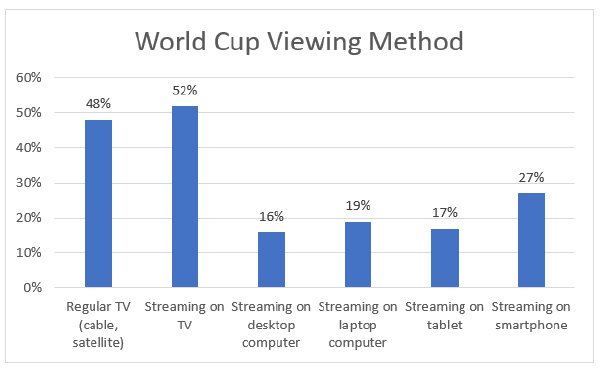 The only group to report a higher likelihood to watch games on regular T.V. over streaming are Baby Boomers at 69% vs. 34%. The rise in streaming's popularity is evident across all types of content. Sports, however, has been a holdout in that the major networks are generally viewed as the best place to view live events. However, the fact that the World Cup audience skews younger is bolstering streaming over broadcast. Fox Sports and Telemundo and their respective streams have the U.S. broadcast rights for the U.S. Likely viewers, however, are not yet aware of that since 52% of respondents said they would watch on ESPN vs. 35% on FOX and 21% on Telemundo.

Awarding the World Cup to Qatar has been controversial. Accusations of bribery being the reason the tournament was awarded and the fact that the country could not host the tournament in the summer because of excessive heat are concerning but their poor human rights record has garnered the most attention. Building the soccer stadiums in a country with summer highs of 108/109 °F and weak worker protections has caused the death of 6,500 foreign workers. Additionally, homosexuality is illegal in Qatar and punishable by up to three years in prison and death under sharia law for Muslims. This has led some brands who normally sponsor the tournament to pull out of this year's event. Others have issued statements condemning the human rights abuses but have stopped short of pulling their sponsorship. 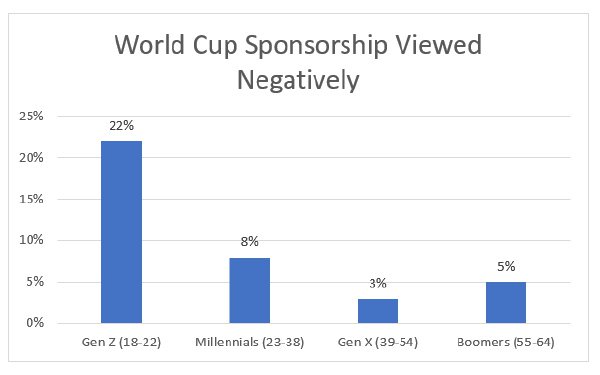 While controversy surrounds the 2022 Qatar World Cup, viewership in the U.S. is likely to remain strong and the potential for backlash against sponsoring brands will remain low. The fact that it will be played in the fourth quarter makes it difficult for brands to stay away since it's when most Holiday ad spending takes place. However, brands that choose to sponsor World Cup events this year should also demonstrate their support of the LGBTQ+ community and workers' rights to make it clear where they stand.

In a time when U.S. viewership of international sporting events like the Olympics is declining, more attention will be placed on the expanding World Cup audience. Americans will be tuning in, or more precisely, logging on. Brands that care about staying relevant need to be there with them by utilizing zero-party data services that enable you to connect directly with World Cup fans.