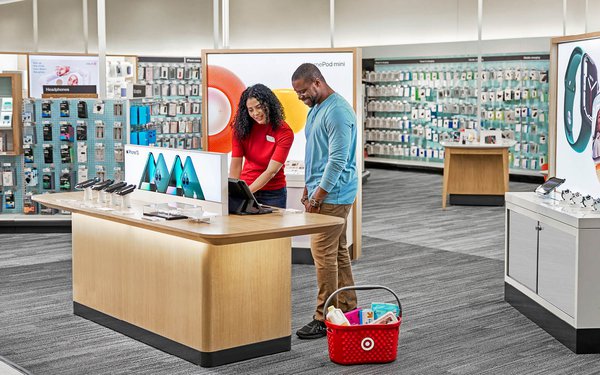 Apple reported record sales for the fourth quarter, proving that the choppy economy isn’t yet slowing down people’s love for their electronics. The tech superstar is expanding its relationship with Target, which has tripled the number of its Apple stores-within-stores.

The Cupertino, California company says sales for its fiscal fourth quarter topped $90.1 billion, an 8% increase year over year -- and a new record. And net incomes rose to $20.7 billion, compared to $20.5 billion in the year-ago period.

“Our record September quarter results continue to demonstrate our ability to execute effectively in spite of a challenging and volatile macroeconomic backdrop,” says Luca Maestri, chief financial officer, in the announcement.

Sales of its iPhones came in at $42.6 billion, up 9.7% from the previous year. Those gains were just short of investor expectations, as were revenue gains in its services division.

Observers are closely watching Apple and other tech brands for signs of slowed consumer spending.

Separately, Target announced it is deepening its store-within-the-store offers, and says it has tripled the number of Apple stores. Now available at 150 Targets, it’s also adding incentives -- including what it says is the best trial offer available for Apple Fitness+ -- to bring in more tech shoppers as the holiday approaches.

The Minneapolis-based retailer says members of its loyalty program can now get a four-month trial for Apple Fitness+ for free, and it’s also offering free trial subscriptions to more Apple Services, some with no purchase required. (Those include Apple Music, Apple News and Apple Arcade.)

“For years, Target has been a destination for Apple product. Now we are excited to deepen our collaboration with Apple so even more guests can access the exceptional Apple at Target shop-in-shop experience,” says Jill Sando, executive vice president and chief merchandising officer, Target, in its release. “Guests love the branded and immersive retail experiences we’re creating with Apple and other partners including Disney, Ulta Beauty and Levi’s. With this Apple expansion, we’re giving guests even more reasons to choose Target for all their shopping and tech service needs.”

The expansion shows how complex Apple’s retail universe has becoming. An enormous retailer in its own right, it has more than 500 stores around the world -- and close to 300 in the U.S. Besides Target, Apple also sells its products in Best Buy stores, as well as direct to consumers.