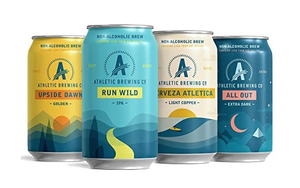 Amid an abrupt change of command in its executive suite, Keurig Dr Pepper has expanded its non-alcohol beverage holdings with a minority investment in Texas-based Athletic Brewing Co.

Today, the company announced that Dokmecioglu had agreed to resign as CEO and a member of the company’s board of directors, “due to violations of the company’s code of conduct that were unrelated to strategy, operations or financial reporting.”

Dokmecioglu became CEO in July to replace Gamgort after holding the positions of CFO and president of Keurig Dr Pepper’s international division.

Dokmecioglu was appointed CFO of Keurig Green Mountain in 2016 two years before the company merged with Dr Pepper Snapple.

“We look forward to partnering with the Athletic Brewing team to help them scale the business," Gamgort said in a news release.

“This investment will enable Athletic Brewing to further accelerate our growth across North America," said founder and CEO Bill Shufelt.

Last month, Athletic Brewing disclosed that it had gained distribution in more than 300 Tesco grocery and general merchandise stores in the United Kingdom.