Number Of Media Agency, Client Execs Commuting To Office Jumps To A Third 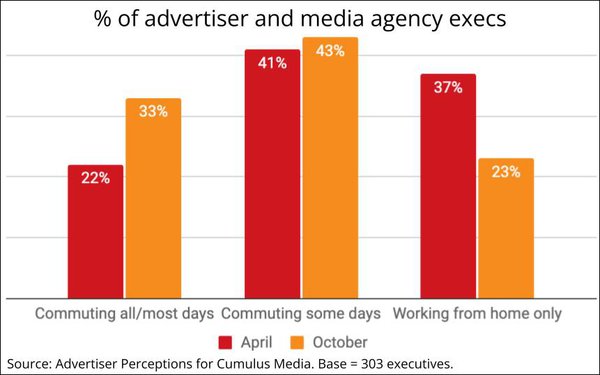 Ad industry execs have dramatically increased how much they commute to and work from the office vs. earlier this year, but they still lag average Americans in terms of the number of days spent working in the office weekly. Those are the top findings from a study Advertiser Perceptions conducted for Cumulus Media.

The study, which interviewed 303 advertisers and media agency executives, found the percentage commuting all or most days of the week has risen to 33% in October from just 22% in April. Correspondingly, only 23% of industry execs say they now work from home exclusively, which is down from 37% in April.

On average, industry execs say they currently commute to the office 3.5 days per week, which compares with 4.3 for the average U.S. adult, according to a separate survey of 1,516 consumers.

The jump in industry pros commuting to their offices was driven mainly by "very large marketers and agencies," according to an analysis of the data published by Cumulus Media Chief Insights Officer Pierre Bouvard.

"In April 2022, small advertising companies were at the office much more than large firms. This Fall, the most significant growth in days in the office came from marketing firms with 1000+ or more employees," he notes. 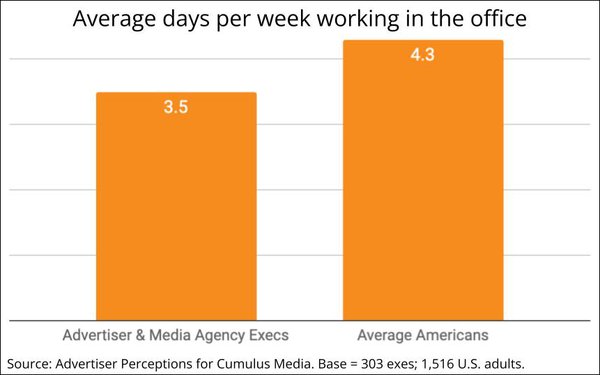