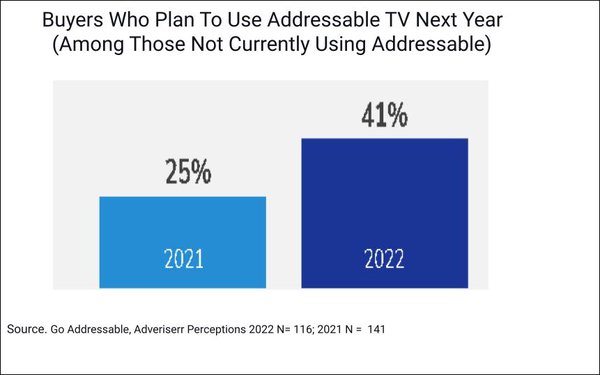 During its annual conference on Wednesday, Go Addressable, the initiative formed by TV distributors to advance and expand use of this advertising medium, released a new survey positioned as indicating continuing momentum for the medium.

Among the 116 respondents who are not currently using addressable, 41% (48) said that they plan to start doing so in 2023. That’s up from 25% (35) of the 141 respondents who indicated the same in the first survey of 300 conducted last October by Go Addressable and the research firm.

Among the 187 2022 respondents who reported that they are already using addressable, 37% (69) said they plan to increase addressable budgets next year. That compares to 34% (54) of the 159 users who said the same in last year’s survey. 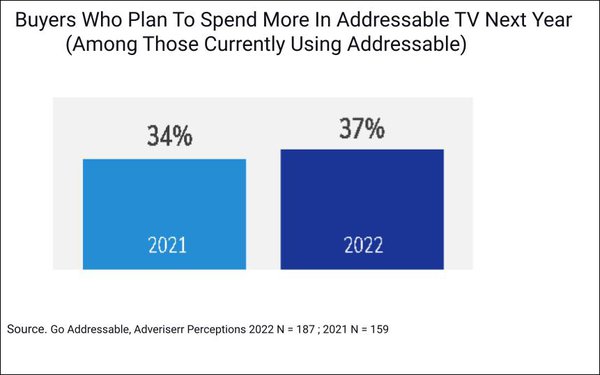 That is likely due to buyers seeking to reach their audiences across different screens and services, according to Go Addressable.

Among current users, 48% said that addressable has become easier to buy, 46% said that the medium’s options overall have improved, and 44% said the cost of implementation has improved.

“We’re thrilled to see that momentum is continuing to build behind addressable advertising headed into 2023,” stated Kevin Arrix, senior vice president, Dish Media. “These latest findings capture the industry’s enthusiasm and adoption of addressable, which has become an increasingly important tool for advertisers to reach their audiences effectively and with tangible ROI.”

Addressable is “one of the most promising and topical ones in today’s TV ad ecosystem,” added Samantha Rose, executive vice president, strategic investment at Horizon Media. “From ease of use to technical enablement to the number of options available, we’ve come a long way in unlocking the scale and potential behind addressable advertising, while doing so in a privacy focused way, and I look forward to what we, as an industry, can do to further its growth and evolution in 2023.”

Within the overall sample of polled agency and brand executives, 41% were at the senior vice president or higher level, 48% at the director/supervisor level, and 11 % at the manager/planner/buyer level.