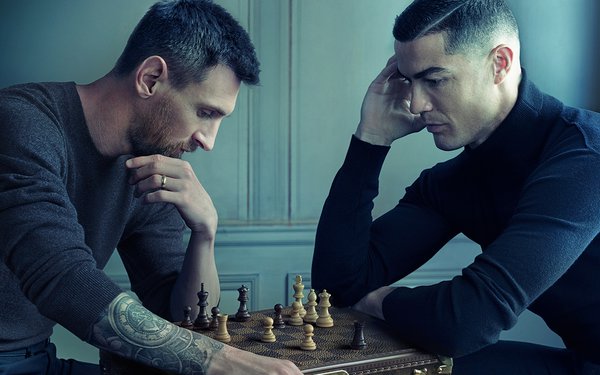 The FIFA World Cup in Qatar may be off to a rocky start, but Louis Vuitton already has a win. It's rolling out a new campaign starring soccer greats Lionel Messi and Cristiano Ronaldo playing chess on a Louis Vuitton suitcase.

The ads are running on social media and headlined "Victory is a state of mind."  The copy continues: "In addition to a long tradition of crafting trunks for the world's most coveted sporting trophies, the Maison celebrates two of the most talented football players today."

The moody photo, shot by Annie Leibovitz, shows Messi, who plays for Argentina, and Ronaldo, who leads Portugal, intently staring at the pieces arranged on Louis Vuitton's signature squares instead of a chess board.

And it turns out they aren't facing just any random game, but a famous one. The sharp eyes in the chess world quickly divined the position is from a game played by grandmasters Magnus Carlsen and Hikaru Nakamura in Norway Chess 2017, reports Chess.com.

The luxury bag maker, owned by LVMH, recently introduced a capsule collection for the quadrennial games, with five collectible pieces, including the Keepall 50, City Keepall and Discovery Backpack.

This tournament is expected to be the last World Cup games for both legendary players.

But it's a rough time for FIFA. As the tournament gets underway, it continues to generate controversy. Much of it is focused on tiny Qatar and its frantic efforts to build enough stadiums, highways and hotels to host the games. Even the former head of FIFA has called the choice of Qatar, a decision made in 2010, a mistake.

A reported 6,500 migrant workers have died in Qatar since 2010. Human Rights Watch and other groups have multiple concerns about Qatar, particularly in its treatment of the LGBTQ community.

And then there's the beer brouhaha, with an abrupt ban on stadium beer sales catching sponsor Budweiser off guard. It reportedly tweeted, "Well, this is awkward," before removing it and promising all that beer to the winning country. Still, its Bud Zero non-alcoholic beer will still be sold at stadiums.

Qatar, which played in the first of the 64 matches, lost to Ecuador in an embarrassing 2 to 0.