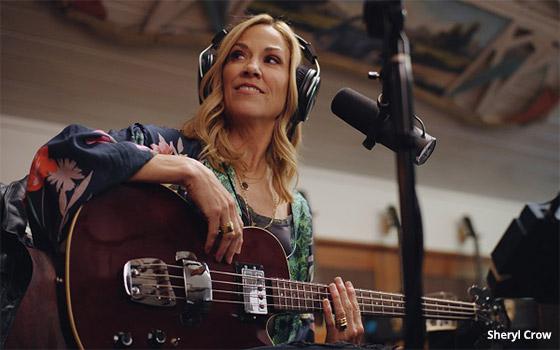 Sheryl Crow is having a TV moment right now.

Two weeks from now on USA Network, she will be seen participating in a raucous, axe-throwing competition and throwing down a hearty tequila cocktail in a Nashville bar.

Later the same week on CBS, a title song she wrote will be a centerpiece of “When Christmas Was Young,” a wholesome, heartwarming made-for-TV Christmas movie for which she was executive producer.

On December 12, she will be one of two celebrity guests who will compete in a series of barroom challenges on the upcoming watering hole-based competition show “Barmageddon.”

The show is based at a bar-and-entertainment venue in Nashville called Ole Red owned by music star Blake Shelton. He is, of course, one of the long-time judges on “The Voice” on NBC.

Shelton is one of the executive producers, co-hosts and stars of “Barmageddon” along with Carson Daly in those same roles. Nikki Bella is credited as host.

Daly is host of “The Voice.” Bella gained fame as a Hall of Fame attraction for the WWE, which has long been a staple of the USA Network lineup.

The premiere episode of “Barmageddon” pits Shelton against Nashville's Kane Brown in a competition whose “events” include Air Cannon Cornhole (shooting balls out of a stadium t-shirt cannon), Keg Curling (in which beer kegs are pushed down an ice rink in the manner of the Olympic sport of curling), Drunken Axe Hole (axe throwing) and Sharts (some kind of dart game).

Sheryl Crow takes up the same games in Episode 2 of “Barmageddon” in which her foe will be Gwen Stefani, who is also a “Voice” judge. She happens to be Blake Shelton's wife too.

In the midst of all of these events, Crow is required to drink a cocktail called The Tapeworm. Mixed by Daly, who is also the show's bartender, the drink consists of a shot of tequila, Tabasco sauce and mayonnaise.

Despite the challenges presented by swallowing this concoction and throwing axes, Crow seems to have thoroughly enjoyed herself.

Here is the plot description for “When Christmas Was Young,” provided by CBS: “The story follows a headstrong music manager (actor/musician Tyler Hilton) in desperate need of a hit song for his last remaining client, who finds himself falling for a gifted singer-songwriter (Karen David) [who] abandoned dreams of making it big, as he attempts to secure the rights to a Christmas song she wrote years ago.”

From t-shirt cannons and keg curling to a wholesome CBS Christmas movie, for Sheryl Crow, every day is a winding road.

Sheryl Crow photo courtesy of Showtime for the documentary "Sheryl," which started streaming last May.