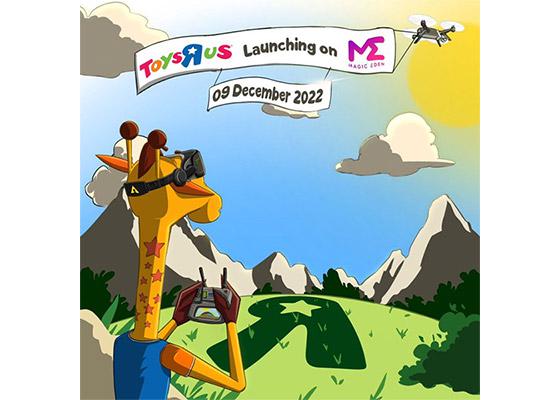 WHP Global, parent company of iconic toy retailer Toys “R” Us, announced on Tuesday that it has partnered with Web3 technology agency Anybodies to officially bring Toys “R” Us into the metaverse with the release of 10,000 digital collectibles.

The exclusive collectibles, also known as non-fungible tokens (NFTs), feature variations of a reimagined 3D animation of the brand’s classic mascot Geoffrey the Giraffe. Each collectible, the company says, is inspired by the variety of toys and brands available at Toys “R” Us stores.

The collectibles will be available for purchase beginning on December 9. They are being released on carbon neutral blockchain Solana and can be purchased on NFT marketplace Magic Eden.

The toy retailer has added a utility to its first NFT release that bridges the digital and physical worlds.

Once purchased, owners of these new NFTs can earn “GCoins,” or tokens, that can redeemed for exclusive access to upcoming physical and digital toys, in-store experiences (such as shopping events and VIP admission at new flagship openings), and early-access to future digital releases and experiences.

“As the program evolves additional loyalty rewards will be introduced including discounts for Toysrus.com,” the company wrote in a recent statement.

“At the heart of any toy and toy store is play,” says Jamie Uitdenhowen, executive vice president of Toys"R"Us at WHP Global. “Our goal is to create immersive digital and physical consumer experiences that excite, educate and are fun as all toys should be.”

Uitdenhowen added that his company has plans for launching more integrated Web3 experiences “and creating a new category for toy ownership for the next generation of Toys “R” Us kids.”

According to the official website, the first two NFT presale rounds have sold out, with 1,500 collectibles purchased.

Toys “R” Us has over 1,300 physical stores around the globe, and recently announced the rollout of stores inside every Macy’s across the U.S.