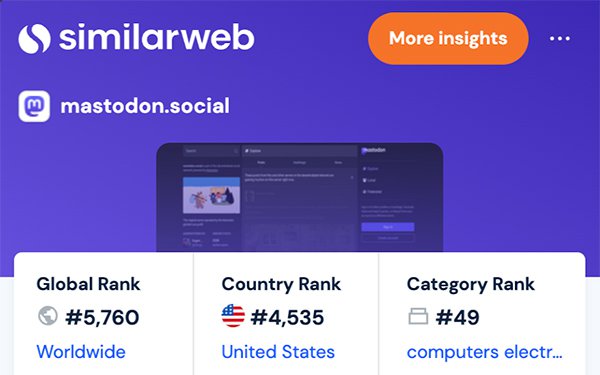 In the month after Elon Musk bought Twitter --  a move that prompted users and advertisers to seek alternative platforms amidst unprecedented job cuts and an ongoing brand-safety disaster -- the microblogging platform’s decentralized rival social network Mastodon not only received widespread coverage from the media, but saw traffic explode 588% from 1.4 million to 9.5 million visits. 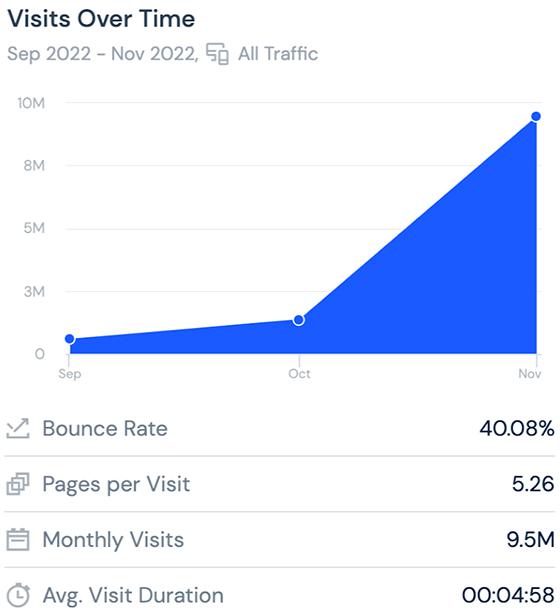 The figures stem from digital magazine Financial World’s analysis of Israeli web analytics company Similarweb. The data reveals that visits to Mastodon.social exploded to over six times the amount in November from the previous month, with most visits from the United States -- just over 25%, or around 2.4 million.

Other main countries visiting are Germany, the United Kingdom, Ireland and Spain.

The analysis, which also looked at Google Trends data, shows that worldwide searches for "Twitter alternative" soared 504% in November to an all-time high.

Musk did not help squash the public’s interest in the alternative microblogging platform when he referenced it in a tweet as “Masterbatedon” (a tweet he later deleted).

The peak of Mastodon’s traffic surge in November came on the November 18, which coincided with Elon Musk starting a poll asking for users to vote on whether or not to reinstate former President Donald Trump’s Twitter account.

Searches for “Delete Twitter” have also surged by 205% in the U.S. and 117% worldwide in the last month when compared to the previous five years.

In addition, an estimated 680,000 Google searches were done worldwide over the past year regarding Twitter account deletion, with 178,000 searches made for “Delete Twitter,” just over one quarter, since Musk’s October 27 takeover.

“There are rumors of Twitter’s demise circling the internet,” says a spokesperson from Financial World. “Twitter’s huge numbers mean it’s unlikely that Mastodon will become a serious competitor until it cements itself into the mainstream social networking space. Users intend to look for new social media platforms to set up homes in, and Mastodon is one to watch for the future.”

Unlike Twitter, Mastodon is a decentralized (or “federated”) network, meaning that its servers (or topic-based communities, like on Discord or Reddit) are controlled by a multitude of users, not a singular corporation. Instead of simply joining the platform as a whole, Mastodon users sign up for a specific server that seems interesting to them, then trust the operators of that server with their data.

This onboarding process has been cited by many as a potential roadblock for new users at a mass adoption level.

Still, despite the complex user learning curve, and the fact that Mastodon is still ad-free (brand posts aren’t promoted through paid posts; if users don’t see an ad coming directly from a brand account, they won’t see it at all), a multitude of journalists and a few major brands like Volkswagen have joined Twitter’s potential successor, hopeful for new ways to discover like-minded communities and reach audiences.