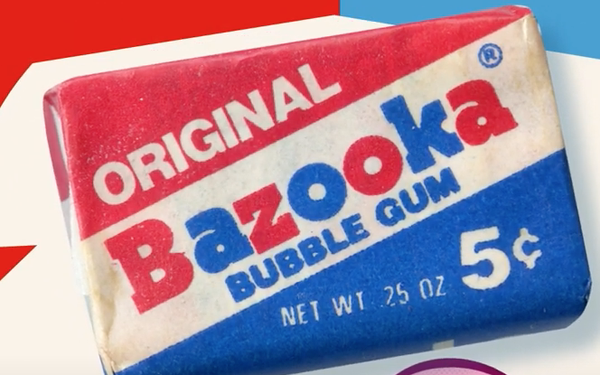 Bazooka Companies marks the 75th anniversary of its iconic bubble gum and Bazooka Joe mascot with a documentary video launching today, available on YouTube and the brand's social channels.

The film discusses the origins of Bazooka bubble gum in 1947 and features appearances by Bazooka Companies owner Michael Eisner and artists who created the comics that accompanied pieces of the gum.

“The taste of Bazooka—whoever created it 75 years ago—knew what they were doing,” says Eisner, who was chairman and CEO of The Walt Disney Co. until 2005.

It was invented by four brothers after their first product—an adult gum branded Topps in cinnamon, ginger, peppermint and spearmint flavors—went nowhere.

“The formula is as secret as the formula for Coca-Cola,” says Arthur Shorin, the son of one of the founders. “There was no one employee that ever knew the entire formula.”

As for the Bazooka name, it didn’t derive from the war weapon but from the nickname for the ocarina musical instrument played by noted musician Bob Burns.

In a preview of the documentary yesterday, Bazooka Candy Brands vice president of marketing Rebecca Silberfarb recalled her childhood memories of the confectionery.

After gathering loose, household change and heading to a nearby corner store, she and her brothers put “all the pieces in our mouths at once before we would take turns reading the comics and just having that classic childhood memory sitting outside.”