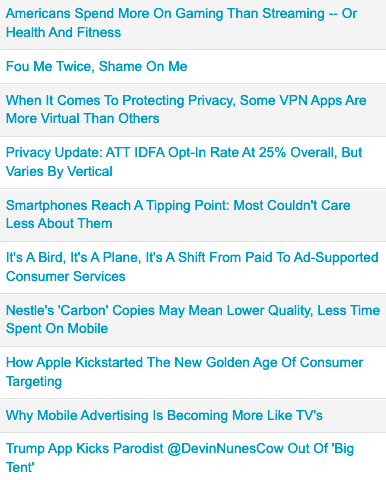 At the risk of ending the year on a contentious note, I'm writing a review of the most-read Mobile Insider columns published by MediaPost in 2022. I can't help pointing out that the top two were about games people play.

The top-read one was written by my colleague Karlene Lukovitz in June, and was based on an All Home Connections study of American gamers conducted by Pollfish. It found they spend $76 monthly on gaming, which is more than they spend streaming other forms of content, or even for health and fitness services.

The study projects that at $912 annually, the average American gamer will spend $58,000 gaming over the course of their lifetime.

The No. 2Mobile Insider was about an individual I blocked on Twitter who also likes to play games.

Most of the rest of the top-10 columns were fairly wonky mobile media stories dealing with data, consumer privacy, and the ramifications of Apple's iPhone app privacy framework. A few stood out for other reasons, including two I'd like to call out.

One was my April 28 column, "Smartphones Reach A Tipping Point: Most Couldn't Care Less About Them," which was based on a Kantar study finding that the percentage of Americans who said they could not get by without their smartphone had fallen to less than 50%. I took that as a good sign about our overdependence on -- make that addiction to -- those devices.

The other one I found personally important was the June 23 column about steps Nestlé Media Lead Laure-Sarah Labrunie had taken to reduce the carbon footprint of the ads the company streamed to mobile devices: downgrading some qualitative aspects of their creative, such as running them in mono vs. stereo sound, and using digital compression to reduce the bandwidth consumed when watching them.

As important as those "hygienic" production quality steps may be to reducing the carbon impact of media, it was an even more profound insight that Labrunie brought up during her presentation at last year's Cannes Lions Festival we should all focus on in the years ahead. In an ironic way, it relates to the above-mentioned column about Kantar's "can't live without" finding.

It has to do with another kind of media addiction -- one that plagues ad industry pros, not consumers per se. It's their addiction to what Labrunie described as a "KPI" or key performance indicator coveted by many brand marketers and agency media executives: consumer time spent with their ads.

"The more time you spend on the internet, the less sustainable you will be," Labrunie said, sustaining the obvious, but adding, "So maybe we need to think about new KPIs and a way to measure what we are doing in media to transform our industry." 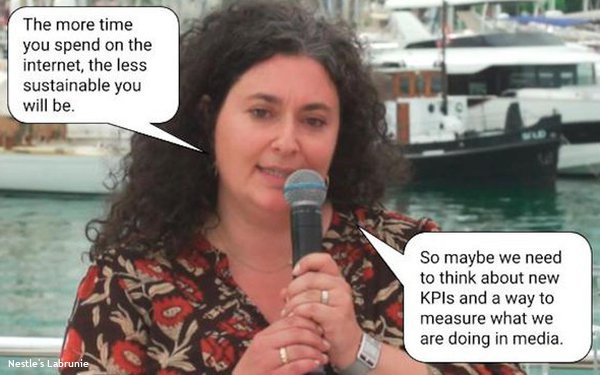