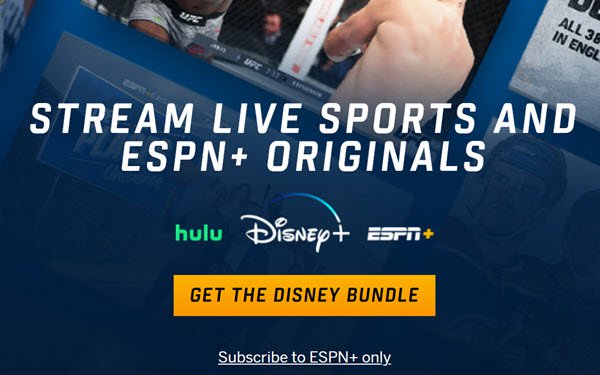 Subscriptions to ESPN+ have hit 24.3 million, up from 17.1 million at year-end 2021, as predictions of a spinoff by parent Disney continue.

Earlier in 2022, Disney's then-CEO, Bob Chapek, fended off pressure from activist investor firm Third Point LLC, led by Dan Loeb, to spin off ESPN+. Loeb argued that such a move would “attract shareholders seeking the respective qualities of each company, allowing the Disney parent multiple to expand as its earnings growth rate increases and the remaining business is no longer haunted by the specter of cord-cutting.”

Disney, which yields substantial revenue from its bundle of ESPN and other cable channels, and ESPN on ABC, does not currently offer livestreamed ESPN coverage through ESPN+ -- presumably in part to protect that bundle.

Bob Iger, who recently returned as CEO after Chapek was pushed out following poor Q3 earnings results, has also resisted an ESPN+ spinoff in the past, although, in 2017, he said that Disney would at some point likely offer the entire ESPN package direct to consumers.

However, in a note last week, Wells Fargo analysts said they consider a spinoff of ESPN and ABC a "reasonably probable last-'23 event."

“A spun ESPN/ABC would take the step as its path to the future, and improve its position when negotiating with leagues for future rights," they wrote.

Of course, at present, ESPN+ is also a critical component of the streaming bundle, with Disney+ and Hulu, which has driven much of the company's direct-to-consumer growth -- although Disney's impending acquisition of Hulu shares currently owned by Comcast opens a number of new strategic directions for the company.

The Wells Fargo analysts argue that an ESPN/ABC spinoff would give Disney "the operational flexibility to move into [direct-to-consumer]," and focus on how to monetize ESPN sports, "unencumbered by the bigger pictures facing Disney, like how to position streaming content, bundle services like Hulu and Disney+, managing linear networks' OIBDA [operating income before depreciation and amortization] to keep the balance sheet stronger into the Hulu put, etc.," they added. "We think some of [Disney’s] resistance to take ESPN fully a la carte up to now is these other issues.”

Meanwhile, ESPN is also reporting strong audience performance across its other platforms.

The brand’s digital platforms are averaging 106.7 million unique visitors per month, up 3% from a year ago.

Year-to-date through Dec. 18, ESPN’s TV audience was up by 8% year-over-year among viewers two years and older and by 5% among those 18 to 49. Its prime-time viewership among those audiences were up 14% and 12%, respectively for the same period.

ESPN’s Monday Night Football viewership for the season’s first 13 weeks averaged 13.4 million per game. The average matched 2021’s and was up by more than 6% from each season going back to 2016.

In addition, the ESPN app continues to lead all other sports apps in the U.S. in reach, with 4.2 times more users than the next most popular sports app, and up 10% versus 2021’s reach.

The app set a U.S. record for U.S. sports mobile apps in September, with 29.5 million unique visitors, and recorded its two best days to date on Sept. 10 and 11, reaching 13.1 million and 12.6 million unique users, respectively.