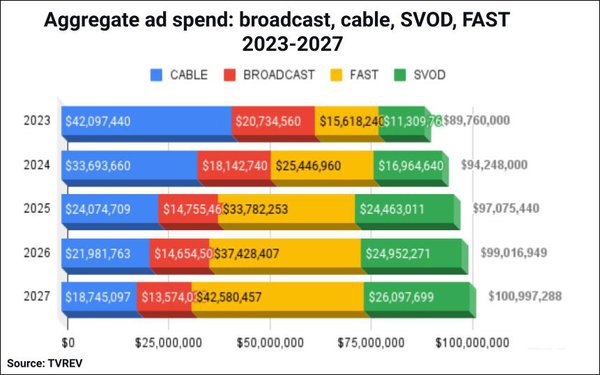 At current growth rates, FASTs are on track to generate more advertising revenue than cable, broadcast or subscription streaming services by 2025, according to a new report on the sector’s evolution from television/advertising analyst TVREV.

While 2023 growth will be somewhat restrained by advertisers' economic concerns and a wait-and-see attitude due to the launch of the Nielsen One cross-platform solution, FASTs should see particularly strong ad gains in 2024 and 2025, followed by continued, still-healthy growth. 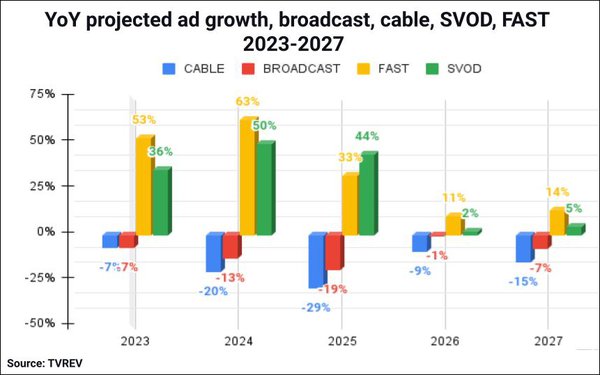 “FAST services today are where cable was 40 years ago,” observes TVREV founder and principal analyst Alan Wolk. FASTs have more available inventory and are “a great reach vehicle,” he says. “The most desirable and hardest-to-reach consumers are spending most of their time on streaming, and the FASTs will be how brands can best reach them.”

Brands will see FASTs as a replacement for cable and SVOD as a replacement for broadcast networks, so the FAST/SVOD split will continue more or less along the same lines, Wolk and co-author Mike Shields predict. But given that there are more SVOD services than broadcast networks and that some, such as Netflix, command much higher CPMs, the split will be closer to 60/40 than the current cable/broadcast split of 67/33. 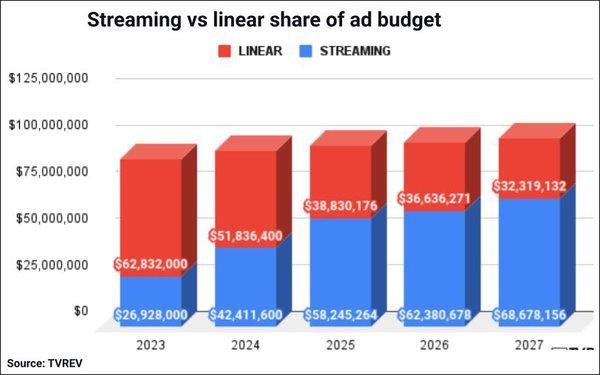 Cable networks — especially those with relatively little original content — will lose more ad dollars than broadcast networks because they’ll lose a larger percentage of their viewer base as consumers defect to FASTs.

The authors believe that legal complications, FCC challenges and other factors will likely prevent broadcast networks from shifting their prime-time programming from broadcast to streaming.

FASTs and streaming in general should also pick up a sizable share of local broadcast dollars as local advertisers take advantage of lower CPMs and the ability to target consumers beyond geotargeting. In addition, streaming will take sizable chunks of elevated local and national ad spend during election years.

Further, FASTs could reap an advertising windfall from D2C brands, if they can provide the volume of inventory and programmatic infrastructure these brands demand.

Sports rights — including how quickly these rights shift to streaming and which services secure them—are one big wild card in the forecast. SVODs could benefit disproportionately, particularly if it turns out that livestreamed sports on SVODs are one of the only ways to reach affluent consumers who otherwise stick to ad-free streaming content. That could send CPMs through the roof, resulting in SVODs taking a much greater than currently projected share of ad revenue.

The report acknowledges the oft-cited remaining problems for streaming advertising in general — including lack of standardization in measurement and buying practices, and legal and accuracy issues relating to first-party data — and some that are currently particularly troublesome for FASTs, such as excessive ad repetition and advertisers’ inability to know the context/programming in which their ads are running.

It also points out progress in starting to address these problems, including the availability of much larger, more refined ACR data sets as smart TVs take over the market, and major media companies’ implementation of protocols on their FASTs to prevent excessive ad repetition.

Still, while the ability to use streaming to target viewers by demographics in streaming, like other digital media, is clearly desirable, brands more than ever value the power of the emotional engagement generated by TV content — so a lack of contextual transparency with FASTs, in particular, is one of advertisers’ biggest issues.

Enabling contextual targeting, while not easy, would actually address a number of the current hang-ups with FAST and streaming buys, the report’s authors argue.

Look for more on this in next week’s Digital News Daily Advanced TV Insider column.

The report can be downloaded at no charge for a limited time.