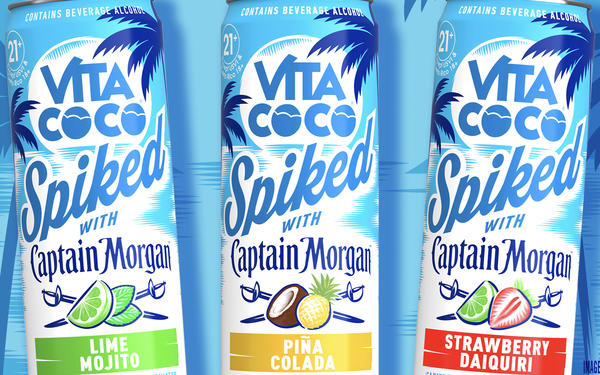 Last week, the company said it will launch Vita Coco Spiked with Captain Morgan in a couple of weeks to help expand the coconut water category.

“There’s still consumers who haven’t tried coconut water. And there’s a great group of young consumers coming through who discovered coconut water in college for hangover cures that we can build the business around,” Vita Coco CEO Martin Roper said at last week’s annual ICR Conference.

In November, Vita Coco said it had a 50% share of the coconut water market in channels as tracked by IRI, while data from Numerator showed the brand had just 11.1% of U.S. household penetration.

The company hopes that Vita Coco Spiked with Captain Morgan will help to expand usage occasions.

“The idea came about because coconut water as a mixer with cocktails is quite prevalent throughout the countries where coconut is grown,” Vita Coco co-founder and executive chairman Michael Kirban said last week at the conference.

“We’ve really worked hard to get consumers in America to put coconut water in their smoothies and after workout occasions. This is a whole new occasion that we haven’t focused on yet.”

In foodservice channels, Coca-Cola and PepsiCo had “sort of monopolized” the business for many years, according to Roper. “Coke owned Zico, Pepsi owned O.N.E, and basically we were blocked out. Both of those brands have been divested, and so we have opportunities to open that up as well.”

At retail, Vita Coco launched its first canned beverage last year at a time when canned coconut water represented about 30% of the category.

The company  has also moved to multi packs to increase its shelf space, and is eyeing the refrigerated section of stores for additional sales growth
alcohol, beverages, liquor, spirits
Next story loading