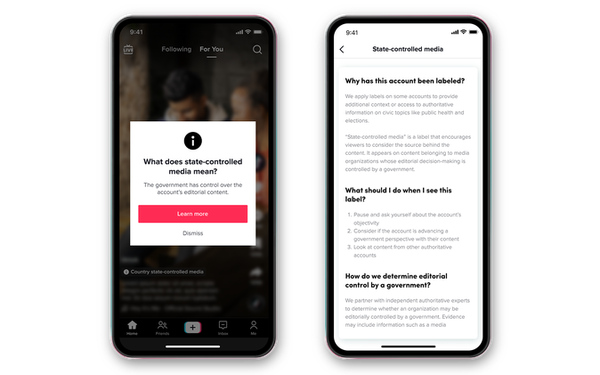 Following its initial testing last March in Russia, Ukraine, and Belarus, TikTok is now expanding the labeling of state-affiliated media outlets on its platform, to help viewers better understand the sources behind content.

“Our state-affiliated media policy is to label accounts run by entities whose editorial output or decision-making process is subject to control or influence by a government,” the company wrote in a recent blog post.

TikTok added that the goal of labeling such accounts is to ensure that users have “accurate, transparent, and actionable context” when engaging with government-affiliated accounts.

Several government-controlled Russian outlets such as RT, RIA, Novosti, and TASS were labeled in March of 2022 under TikTok’s policy, just weeks after Russia declared war on Ukraine.

These state-controlled media outlets used TikTok as a new-age propaganda-machine, spreading disinformation and flooding the social-media platform with sourceless content about the war.

TikTok says it will now be expanding the labels to 40 markets, including the U.S., Canada, China, France, and Japan, with criteria based on editorial independence, coverage, journalistic conduct, and funding.

More labels will come in the future, the company stated.

However, outlets can also appeal the label by submitting proof of editorial independence if they believe it is incorrect.

“We'll evaluate the provided evidence, seek input from independent authoritative experts, and will remove the label if we find the entity does not meet our state-affiliated media criteria,” TikTok wrote.