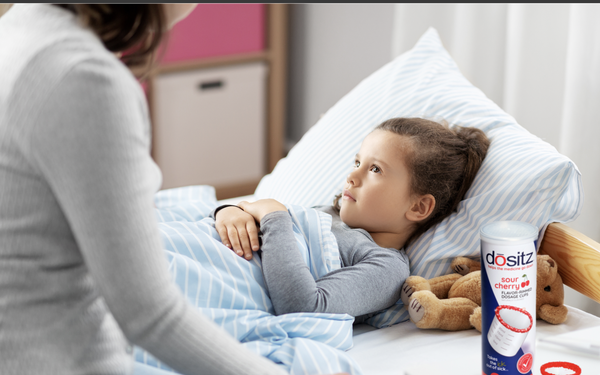 “A spoonful of sugar helps the medicine go down, in a most delightful way,” sang Julie Andrews as Mary Poppins almost 60 years ago.

Turns out, though, the Banks kids in that movie were more accepting than today’s kids of solutions to drinking harsh-tasting liquid medications.

Indeed, nearly half the children on liquid medications are not taking them properly, says the American Academy of Pediatrics.

Kids’ spitting or throwing up bad-tasting medicine could lead to underdosing, overdosing, or no dosing at all -- and that’s “an important public health problem that means longer or more serious illness for thousands of kids each year,” according to the American Chemical Association (ACA).

Why does the ACA care? It’s because kids have a biological preference for sweet tastes over bitter.  And that’s why Poppins had her spoonful of sugar, and parents might try mixing liquid medicine in with juices, or with foods like applesauce (my mom’s favorite strategy when I was a tot).

Other common methods include injecting the liquid into the kid’s mouth with a syringe, as you might do with a pet cat or dog.

And just as our cat gets salmon-flavored liquid meds, pharmacists can add flavor to kids’ prescriptions. FLAVORx, a company that sells directly to pharmacies, has been around since 1995 and now offers 15 flavors -- from apple to watermelon. FLAVORx is available at 46,000 pharmacies nationwide, including major chains. The company says pharmacists have flavored over 150 million medications to date.

But such flavors “often result in merely a different unpleasant taste,” and are not available for over-the-counter products,  says Geoff Addeo, who with his wife has developed Dositz: dosage-sized cups rimmed with fruit-flavored crystals, in blue raspberry, green apple, sour cherry or watermelon.

Dositz “is the only product to actually chase away the harsh taste rather than attempting to mask it,” Addeo tells Pharma & Health Insider.

Seems that his wife’s late stepfather had worked as a volunteer in the pediatric ward of New York’s Memorial Sloan Kettering Cancer Center (MSKCC), and would often complain how horrible it was that kids about to be sent home wouldn’t take their medicine.

“They have meds that actually save their lives, but it’s a nightmare [to get] them to take it,” Addeo says.

Of course, “there are children out there who do take their medicine and it’s not an issue,” he adds, noting that millions of kids are prescribed harsh-tasting medicines annually. While “I’m not going to capture 80% of the market, 1% or 2 % would be awesome.”

Down the road, Addeo is also eyeing such potential markets as dementia sufferers and pediatric dentistry.

Dositz (whose tagline is “takes the ick out of sick”) is just now coming out of marketing stealth mode after five years of development and a couple of years of quiet D2C sales. 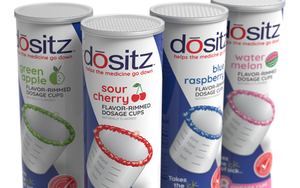 Addeo and his wife developed the product and then brought in Gyre9, a design firm headed by Ed Gilchrest, to do the product’s package design, develop its website and technology, and manufacture the Dositz cups.

Gilchrest also became a partner in the business, owning a third of Dositz, which is self-financed, along with the two Addeos.

“That’s half of our challenge,” Addeo saysof the self-funding.  “We don’t have a massive budget, (so) it’s been a soft and slow launch. I think that’s the only way we could do it without going through our bankroll and all of a sudden living on the street.”

“It’s a huge risk,” agrees Gilchrest in a conversation with Pharma & Health Insider. “It might go nowhere, (but) I felt it was worth the investment.”

Self-funding also means that “brick and mortar” sales are out for now “just because of the entry fees,” Addeo explains. “We definitely do not have the disposable cash for programs and planograms [plans for retail displays].”

The brand, though, will expand in a different direction later this year, he says  -- by approaching hospital systems such as MSKCC and St. Jude’s.

For now, though, Addeo and Gilchrest just want to build brand awareness.

To that aim, Addeo, also a TV production pro who spent eight years as a marketing exec for AMC Networks (and such shows as “Mad Men,” “Breaking Bad” and “The Walking Dead”), is using his skills to produce a “social media-type animated promo,” and Dositz/Gyre 9 are starting publicity efforts, as evidenced by this very article.

“We’ve done zero marketing up to this point,” says Gilchrest. “We need to make a push. You can’t just put it online and assume people are going to buy. People need to be aware that this thing exists, and why it exists. “

FLAVORx, meanwhile, reaches out to parents with such website features as giving a $50 Visa gift card each month to a parent who shares their child’s FLAVORx experience for publication. The site provides a searchable-by-Zip-code directory of FLAVORx pharmacies and tells parents, ldquo;Just visit a FLAVORx pharmacy and ask the pharmacy staff to add your child’s favorite flavor.” There are also downloadable tips for parents, coloring sheets for kids, and marketing materials for pharmacies to use.