GroupM: 'It's Realistic' Netflix Will Become A Top 25 Ad Seller

A week after predicting Apple was poised to break into the top 25 companies selling advertising, GroupM’s Business Intelligence team hinted Netflix might be next.

While Netflix management did not disclose explicit ad-revenue figures in their earnings call late last week, GroupM’s Kate Scott-Dawkins noted they estimated that advertising would be “greater than 10%” of total revenues.

“In today’s numbers, that would put them in our top 25,” she noted in the “This Week, Next Week” podcast she co-hosts with GroupM’s Brian Wieser, adding: “That would be interesting if they got there.”

Based on projected growth figures, Wieser added that it is “realistic” for Netflix to be a $4 billion to $5 billion annual ad-sales organization within a few years.

“It doesn’t need to be the dominant way people access Netflix to be that size of a business,” he added, noting that even at only a percentage of total subscriptions, Netflix’s ad-supported option should be able to generate enough “tonnage” of advertising inventory to support that.

That projection, coincidentally, is close to the kind of estimates Wall Street analysts are projecting Netflix to deliver in advertising revenues over time.

“Although details on its ad tier launch were sparse, management was pleased with the trajectory and added that engagement on the ad tier was similar to non-ad plans and that early ad member growth and uptake were solid due largely to the tier’s lower price point,” New Street Research analyst Dan Salmon noted in a report sent to investors late last week.

“To help frame the long-term opportunity, management noted their internal estimate that ~50% of Hulu’s members are on its ad tier and said it is aiming for advertising to eventually grow to >10% of revenues,” he noted, adding: “Moreover, management said its immediate focus is to gain share in the branded video ad market (~$180B ex. China and Russia) while also developing digital ad market capabilities such as more sophisticated targeting and measurement.”

In his long-term estimates, Salmon projects Netflix would approach $4 billion in annual ad sales by 2030. 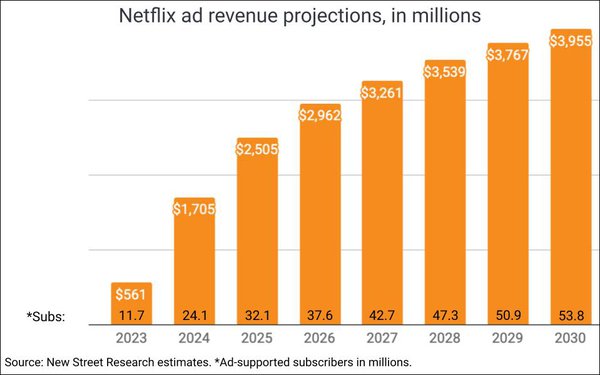