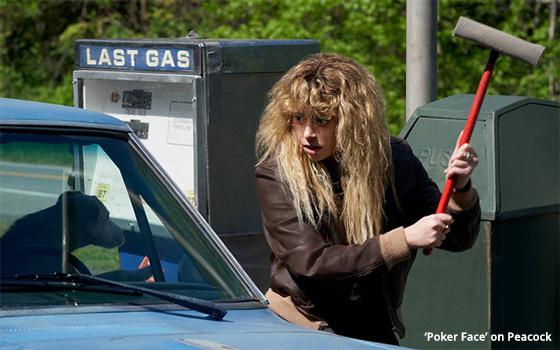 I finished watching Episode One of the new Peacock series “Poker Face” about 20 minutes ago and I’m still shaking from the thrill -- and dare I say, art -- of this new crime drama.

Wow -- and OMG, as the kids say (minus the F). With all due respect to the good and even great shows that sometimes pass before my eyes around here, “Poker Face” soars high above them in some TV stratosphere where the population is sparse.

Take my opinion or anyone else’s with a grain of salt, since TV reviews are a matter of personal opinion.

But for me, a long-time enthusiast of detective fiction and detective TV shows, “Poker Face” is a four-star 10 on a scale of 1-10.

This is a wholly original take on the detective drama, one in which the “detective” is not really a detective at all.

Instead, she is a young woman who lives a decidedly under-the-radar life who can’t seem to stop herself from getting involved in murder investigations.

Her detecting skill comes from an unusual skill: She can tell when someone is lying. The series’ title, “Poker Face,” is a reference to this talent, but her ability goes beyond the mere detection of facial tics, the “tells” of the poker table.

This is not a supernatural show. Her extraordinary talent for detecting untruths is treated here like any other unusual, rare skill such as photographic memory, for example, or the ability to calculate complex math equations in the blink of an eye, or that very rare ability to remember what happened on every single day of your life.

The woman, named Charlie, is played to perfection by Natasha Lyonne (pictured above). She is an executive producer of the show and its heart and soul.

Each episode of “Poker Face” is a self-contained mystery story with a beginning, middle and end. As Episode One came to a close, however, there also seemed to be story arc that will carry through most, if not all of the remaining nine episodes (10 in all).

I liked everything about this show --  including casting, photography, locations and especially the writing and presentation of the story in the premiere episode I watched yesterday.

In Episode One, subtitled “Dead Man’s Hand,” Adrien Brody guest-stars as a casino manager and Benjamin Bratt is on hand as his right-hand henchman.

Rian Johnson is credited as creator, writer, director and executive producer of “Poker Face,” so it is not unreasonable to assume he deserves the lion’s share of credit for the incredible story in Episode One (and whatever comes next in subsequent episodes).

The Episode One story is a complicated tale of murder, a casino and people living on the fringes of society. Nothing in the premiere is predictable. Forget about trying to determine what happens next.

The locations look vaguely southwestern, but they really could be anywhere. The show is like a travelogue on a blue highway to nowhere.