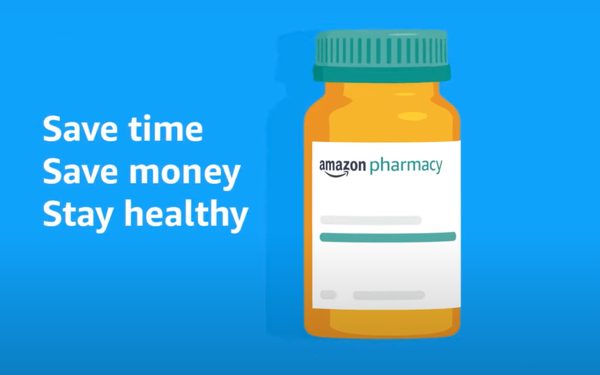 Amazon isn't giving up on its goals to disrupt the health and medicine universe. It's introducing RxPass, a $5 monthly service for Prime members. The flat fee, which includes free shipping, will provide medications for common conditions, such as anxiety, acid reflux and high blood pressure.

Prime members already get free delivery on prescription medications. But with RxPass, they can further reduce the cost of generic medicines -- and save themselves a trip to the drug or grocery store.

With its signature simplicity, Amazon says people can sign up for RxPass, with 24-hour pharmacists on hand for refills and communications with doctors. The service accepts most insurance plans, and those without insurance can save with the Prime prescription savings benefit. Available for no additional fee, it offers discounts of up to 80% off generic and 40% off brand-name medications.

There are plenty of restrictions based on insurance and the state where medications are shipped. And those with government-funded insurance, including  Medicare or Medicaid, are ineligible right now.

It will continue to offer its PillPack service, designed to help people who take three or more medications each day and prefer their medications sorted by date and time.

The move comes amid an all-out retail turf war for pharmacy sales. Besides the usual suspects, including CVS, Walgreens, Walmart and Rite Aid, newer players like GoodRx and Mark Cuban's Cost Plus Drugs are all vying for the same customers and their endless refills.

These new companies have increasing appeal because consumers are more focused on these savings than ever as the costs of non-generic medications continue to spiral beyond their reach.

It's hard to overstate how bad the problem has gotten. A recent study found that as many as 1 million people with diabetes in the U.S. are currently rationing their insulin to save money. And for 14% of those with diabetes, insulin now eats up more than 40% of their available income with "catastrophic" implications, according to a new study from Yale University. Asthma medications are similarly beyond unaffordable.

According to health advocacy experts, roughly a third of the U.S. adult population, including those with insurance, can't take their prescriptions because they can't afford them.

For years, observers have thought Amazon might launch pharmacy services that could decimate its drugstore competitors.

But mostly, there have been misfires. It acquired PillPack in 2018 for $750 million, and its founders quietly left the company four years later. In 2021, it disbanded Haven, a joint venture between Amazon, Berkshire Hathaway and JP Morgan, after three years.

And it's too early to say how much progress it will make with One Medical, which it acquired in July for almost $4 billion. The membership-only primary care practice has some 770,000 patients.

The RxPass launch "shows that, despite some recent stumbles, the company has far from given up its ambitions in healthcare as it strives to serve an increasing number of consumers in the prescription drug market," writes Neil Saunders, managing director of GlobalData, in his note.

He says that while Amazon Pharmacy "has grown and taken some market share, it has fallen short of disrupting the drug market."