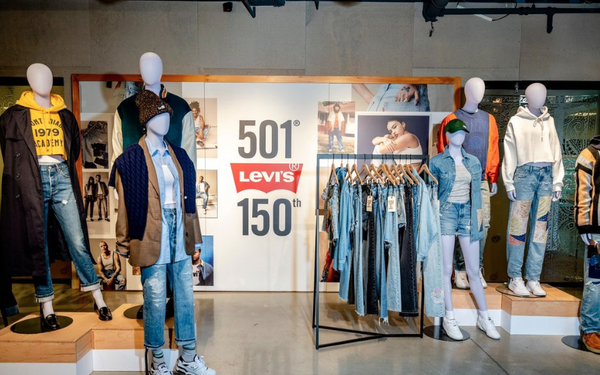 Consumers are still fretful about the economy, and many see clothing splurges as an easy place to cut back. That's led JP Morgan to downgrade its rating of Levi Strauss & Co. It also plays a part in Baird's decision to downgrade VF Corp., parent of such brands as the North Face and Vans, and Canada Goose, the trendy parka company.

Levi Strauss is still a best-in-class clothing brand with a seasoned management team, writes Matthew Boss, an analyst who follows the company for JP Morgan. Still, he is downgrading the company to a neutral rating "due to the somewhat discretionary nature of apparel spending.”

He says the risk is more pronounced as Levi's diversifies away from core replenishment jeans and into more fashion-oriented clothing.

"Levi's revenues may be subject to pressure during times of declining consumer confidence or reduced disposable incomes," Boss says. During the economic downturn of 2008, the company's U.S. sales dropped "in the low-to-mid-single-digits."

Boss also sees potential risk for the company, since so much of Levi's revenues come through wholesale channels, especially in department stores, which are "struggling for apparel market share, closing stores, and in some cases facing bankruptcy."

At Baird, analyst Jonathan Komp also downgraded several stocks, moving VF Corp. and Canada Goose to a neutral rating. While he notes more investors are hopeful that the economy is headed for a soft landing rather than a recession, "we still fear potential future softening of consumer spending."

He cites additional concerns about VF's Vans. Its turnaround is taking longer than expected, including inventory challenges, an unexpected CEO transition, and continued macroeconomic headwinds.

And for Canada Goose, he believes slowed consumer spending in China will likely still drag on growth.