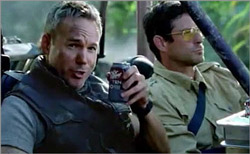 When you run a campaign specifically declaring that a new product is “not for women” (however tongue-in-cheek the tone), you’ve got to expect to generate some mixed reaction.

Sure enough, the first television spot for Dr Pepper Ten -- Dr Pepper Snapple Group’s (DPS) new 10-calorie line of soda for men who “prefer the full-flavor experience of regular Dr Pepper but want a lower-calorie option without the diet imagery” -- seems, at least initially, to be proving more popular with men than women, judging from Ace Metrix scores from Oct. 12 (one day after the commercial debuted).

The TV spot uses a faux action movie scenario to spoof men’s fondness for that genre and macho attitudes in general, with one of the male “action heroes” in the ad directly addressing the “ladies” viewing the commercial. The drift: Like this “movie,” Dr Pepper Ten -- with “only 10 manly calories but all 23 flavors of Dr Pepper” -- is a guy thing. The spot concludes, “So you can keep the romantic comedies and lady drinks, we’re good…Dr Pepper Ten -- It’s not for women.”

Among TV spots for eight non-alcoholic beverages airing between Sept. 11 and Oct. 12, the Dr Pepper Ten ad ranked fifth. (The highest-scoring ad was Pepsi’s “Who’s Next?,” featuring clips of its various celebrity spokespeople, at 584; the lowest-scoring was 7Up’s “Cee-Lo Green: Be Yourself,” at 524.)

The Ten beverage line, featuring a new blend of sweeteners said to achieve a “like-regular” soda taste, was developed out of research showing that many men --- particularly those between 25 and 34 --- want to make healthier/ lower-calorie beverage choices, but aren’t satisfied with the taste or diet image of most diet sodas.

Meanwhile, the scores among women were indeed lower than the ad’s own 552 average -- but still at or above the category’s norm of 536.

In short, despite the ample debate on social media (is the ad sexist, or good-humored satire?), the gender-polarization effect might prove less pronounced than some might have predicted.

Of course, DPS by no means went into the campaign -- which also incorporates print, online and social media (including a Ten Facebook app supposedly accessible only by men) -- without testing the waters.

The “It’s Not for Women” messaging was tested in six markets early this year, across TV, radio, out-of-home and in-store displays. And while DPS hasn’t revealed metrics on reactions from women, it has reported that the campaign’s results “far exceeded expectations,” yielding high consumer awareness and Ten sales that represented nearly 6% of total Dr Pepper sales throughout the test period.

The Ten product was tested in packaging similar to its rollout packaging -- a design that reinforces the male-centric theme (gunmetal gray color scheme, faux industrial rivets graphics, and a bold font that plays up “10 BOLD tasting calories” messaging on the bottle).