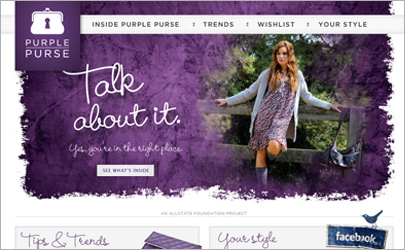 The Allstate Foundation is partnering with the YWCA for a campaign in conjunction with Domestic Violence Awareness Month.

The main component of the program is its website, www.PurplePurse.com, which is disguised as an online shopping magazine. After scrolling down the page, the visitor will find a variety of information and resources about domestic violence embedded into the content. The site was created in this way because many women who need help are constrained to get it, according to an Allstate spokesperson. They live in households with controlling partners who closely monitor them, including their web surfing.

To kick off the campaign, the Allstate Foundation and YWCA, along with top bloggers, are organizing TweetUps in nine cities across the country, including Birmingham, Ala., Chicago, Cincinnati, Cleveland, El Paso, Texas, Los Angeles, New York City, Seattle and Tucson, Ariz.

These events are designed to explain the story behind the Purple Purse, share information about the issue and encourage individuals to help spread the word about the campaign. TweetUp attendees will also have the opportunity to hear from a domestic violence survivor at each event. As an additional incentive to inspire more people to get involved, The Allstate Foundation will donate $100 for each TweetUp attendee, up to $10,000 at each event, totaling a $90,000 contribution to the YWCA.

Individuals across the country are encouraged to participate in the campaign and show their support by carrying a purple purse or bag throughout October, posting their favorite purple purse pictures to PurplePurse.com and downloading the Purple Purse widget available on the website.

Even though domestic violence affects one in four women in their lifetime, more than one-third of Americans have never discussed the issue with a friend or family member, according to a survey conducted by Allstate. Three out of five believe that it is a difficult issue to discuss. Each year, the Allstate Foundation contributes more than $3 million in grants and programming to support economic empowerment for survivors and to help end domestic violence.

“What many people don’t realize is that abuse can be financial in nature such as withholding banking information or controlling a partner’s money or misusing her financial identity and ruining a person’s credit. This occurs just as frequently as physical abuse,” said Michele Mayes, Allstate executive vice president and general counsel, in a release. “We are rallying people behind the Purple Purse because it stands for economic empowerment and represents the center of a woman’s financial domain. It’s also meant to convey the message that it’s okay to talk about it.”