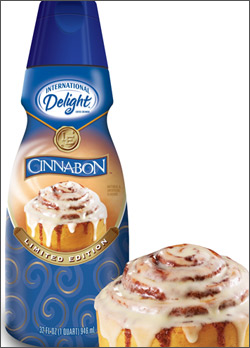 The TV spot, now airing, was filmed in a Cinnabon bakery in Montebello, Calif. It shows a young boy begging to be treated to a Cinnabon Cinnamon Roll, then flashes forward to show him as an adult, now begging to be treated to International Delight’s Cinnabon-flavored creamer. An end shot in the ad shows both a bottle of the Cinnabon creamer and a bottle of ID’s Almond Joy-flavored creamer, both of which are positioned as “limited edition” flavors.

The Cinnabon-flavored creamer’s sales have been realized primarily through consumers’ simply seeing the product in stores, says Becker. “Up to this point, there hasn’t been a lot of marketing push,” she says. While limited-edition products would generally be available for a year, International Delight may elect to extend the Cinnabon -flavored creamer’s availability, or ultimately make it a permanent offering, because of its success, she adds.

Cinnabon, Inc. has more than 800 bakery locations worldwide (about 300 in the U.S.), primarily in high-traffic venues such as shopping malls, transportation hubs, entertainment centers and academic institutions. Nearly all locations are franchised.

Franchisees rely mostly on in-store marketing, rather than media campaigns, explains Becker. That makes a Cinnabon bakery’s first appearance in a national TV ad, via the “co-branded” ID creamer spot, particularly exciting for the Cinnabon brand and franchisees, she says.

Cinnabon, Inc. licenses the Cinnabon name for more than 50 products, to companies/brands including Pillsbury, Betty Crocker and Kellogg, Becker reports.