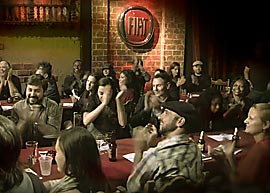 Fiat is bringing the moth to urban radio stations around the country. Okay, it's not exactly The Moth, but it is inspired by it. The Moth is live storytelling, kind of like “open-mike night” meets Spalding Gray.

Over the past couple of months, the automaker -- which is part of the Chrysler LLC organization in Auburn Hills, Mich. -- held over a dozen live storytelling events in New York and other markets, then recorded and filmed them for a program called "Alternate Routes."

The radio and Web program, which aligns with the company's urban-resonant "Life is best when driven" mantra, puts two-minute abbreviations of those performances on CBS radio stations in the New York, Los Angeles, Chicago, San Francisco and Orlando markets. The radio ads direct viewers to Fiat's Facebook page (www.facebook.com/fiatusa), where the performances can be heard and seen in their entirety as filmed before a live audience.

Casey Hurbis, head of media, social media and CRM at Fiat, said the effort will comprise 12 stories that air over an eight-week period starting this week, plus eight other story performances on the Fiat Facebook page. "We have been running a mass-media play on national broadcasts geared toward building awareness," he says. "So when the Altitude Group brought this to us, we started going though the concept and idea, saw the media connection between what Moth and storytelling does and what the Fiat brand represents."

The radio spots make spare mention of Fiat, but allude to the brand personality. Voiceover for the radio assets say "That's Matteson Perry [one of the storytellers] talking about the most exciting and dangerous day in his life. It's part of 'Alternate Routes,' a new storytelling experience brought to you by Fiat. Fiat believes life is best when driven."

"There is a nod and a mention of Fiat, but it's really about the content, the story," says Hurbis. "The two minutes draw you in, so you want to know about the story. We see with folks interested in Fiat and with owners that they love culture and love to discover new things." He says the company listened to some 200 performances before tapping the top ones to feature in the campaign. Matteson Perry, for example, talks about his experience running with the bulls (or away from them) in Pamplona, Spain.

"We are still building awareness around Fiat," says Hurbis. "The Moth and storytelling seemed a natural fit for Fiat. We see connection with storytelling and life experience."