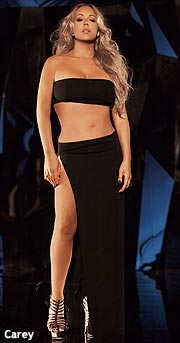 The Four Seasons on 57th Street in New York became Carlsbad, Calif., on Wednesday as weight management company Jenny Craig (which is based in the cavern capital of the U.S.) took over the subterranean portion of the hotel to introduce a new corporate brand, a new program and a new brand ambassador.

Mariah Carey will be the brand icon for the company, which has also dropped its surname, and will henceforth be called "Jenny."

A nosh-pit of Jenny-inspired food preceded the actual event, so the scrum of video camera-wielding road warriors and the errant beauty writer tasted veggies, tiny burgers, and small dishes of pasta and chicken, garnished with hummus and baba ganoush.

The company used the event to launch a new four-week long protocol called “Jenny-Set-Go,” a sort of rapid-change program that costs $15, plus the cost of food. It features a structured menu delineated through a deck of cards, an online site at jennycraig.com with the ability to download iTunes playlists, get workout plans, and recipes.

The company touted the program on “The Rosie Show” on OWN.

Carey is also representing Jenny in a program with the American Heart Association, "My Heart. My Life." Carey will be in PSAs, community programs, education and online activations.