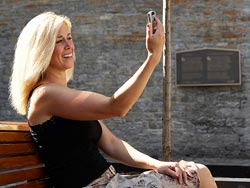 So here’s something unexpected: Consumers are paying less than they expect to when they’re buying smartphones, and retailers are letting them leave with the savings.

According to The NPD Group’s Smartphone Track service, among people who expected to pay between $200 and $250 for a new smartphone, nearly two-thirds of them (64%) ended up buying a phone for less than $200. According to the market research company, selling prices for smartphones have declined for four consecutive quarters, down to an average of $135 in the third quarter of 2011.

The majority of these people paying less than expected, according to Ross Rubin, executive director of industry analysis at NPD, are those upgrading their feature phones to smartphones, rather than early adopters, who are still willing to pay a premium for the latest technology and innovations. According to the NPD research, 59% of the mobile handsets sold in the U.S. during the third quarter of 2011 were smartphones. The top sellers during the third quarter were Apple’s iPhone 4 (the 4S hadn’t been released during that quarter), the iPhone 3GS, and the HTC Evo 4G.

And with increased savings is a missed opportunity, Rubin says. Even with the increase in smartphone sales (and declining prices) accessory sales (such as covers, Bluetooth headsets, etc.) remained steady when compared with last year. With people spending less than they expect on the device, they’re primed to spend more on accessories than they had originally thought. Retailer carriers have to change their mindset to just selling phones and plans to selling the entire mobile experience, he says.

“There’s money being left on the table,” Rubin tells Marketing Daily. “Retailers have an opportunity to make up revenue from these accessories. There’s a range of products that retailers can avail themselves of to optimize [spending].”