Ford Partners With Zynga For Escape 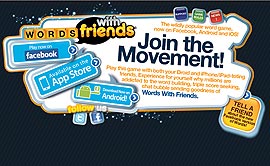 In a first for Ford and perhaps a first for the industry, the Dearborn, Mich.-based automaker will introduce a new vehicle through a social media game. Ford has partnered with digital social-platform gamemaker Zynga to create what Ford is calling the world’s largest version of Zynga's “Words With Friends” game.

The effort, which starts on Tuesday, also involves actress Jenny McCarthy, who will play the game against U.S. consumers. It is all part of Ford's reveal of the 2013 Escape at the Los Angeles Auto Show.

As about a third of Americans own smartphones, the automaker has been putting the focus on them and other mobile devices for the upcoming launch of the compact crossover SUV. Zynga says it has some 230 million monthly active users playing games like CityVille, FarmVille, Empires & Allies, and FrontierVille. Ford recently introduced a new marketing campaign for the forthcoming Escape on mobile app GoldRun. It is also running "Escape Routes," an interactive reality series featuring the Escape. The team-based competition continues into next year.

Matt VanDyke, director of U.S. marketing for Ford, says that revealing the vehicle through a Zynga social game lets the automaker "Expand its reach beyond traditional social channels to mobile platforms that engage a broader audience.” The company will be doing a lot of social and mobile programs around the new Escape when it launches next year.

In the game, which will take place from 8 to 9 p.m. Pacific at Hollywood and Highland in Los Angeles and live-streamed on Facebook, players can submit their word suggestions through the chat.

Separately, Ford has collaborated with shift.com, a sustainability-focused site founded by "Entourage" actor and filmmaker Adrian Grenier and film producer Peter Glatzer that focuses on film, design, art, transportation and culture projects around the issue of sustainability.

Ford says it will use its sponsorship of the site to try to clear the thickets of confusion around the differences between alternative vehicle powertrains like hybrid, hybrid electric, and electric. The collaboration includes a documentary series on sustainable-business leaders, live-event programs and film festivals. Besides Ford, the Shift site gets sponsorship dollars from Virgin America, Stonyfield Farm, and Marvell semiconductor.