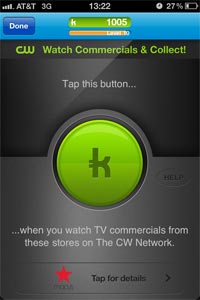 In May, shopkick announced it was taking its mobile shopping technology to TV through a partnership with the CW network. The deal would allow people using the shopkick app to unlock exclusive deals when certain commercials aired during CW programming. Six months later, the cross-media program is rolling out with Tuesday night’s episodes of “90210” and “Ringer” on the CW.

The network will provide subtle on-screen prompts during the prime-time shows reminding shopkick users to open up their app to receive deals. Through a smartphone’s microphone, the app will automatically recognize TV commercials from participating advertisers. Once the TV is identified, it delivers rewards in the form of redeemable “kick” points and special offers on products.

The launch advertiser for the initiative is Macy’s, with other shopkick retail partners to follow. Macy’s was among the first to work with the startup when it launched its mobile app last year that allows shoppers to earn points simply by walking in the door via in-store technology. The app also provides information about promotions and provides kicks for scanning codes on select items.

In addition to Macy, other retailers that have teamed with shopkick include Old Navy, American Eagle Outfitters, Target, Toys 'R’ Us, and most recently, Giant Eagle supermarkets. Shopkick says it now has 2.1 million active users, more than half of whom are women.

For marketers, shopkick’s effort to expand its reach to TV holds the promise of linking commercials directly with retail purchases via smartphones. Marketers have also taken advantage of audio recognition technology in Yahoo’s IntoNow app and the Shazam to offer bonus content and discounts when the apps are used in conjunction with particular TV shows and ads.

This summer, for instance, Lifetime turned to IntoNow to promote the upcoming season of “Project Runway,” by allowing viewers to tag each episode with the app to get free digital content including photos and videos, participate in fashion-related polls, and interact with friends and other fans.