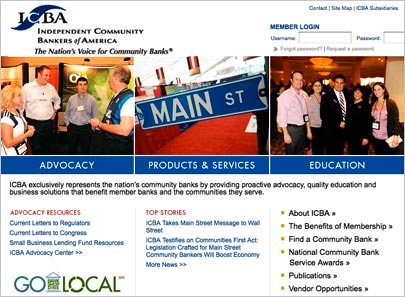 Bank Transfer Day may be over, but the Independent Community Bankers of America (ICBA) is keeping up the push to encourage consumers to move their money out of the big, nationwide banks.

The association is taking its “Go Local” message to Wall Street by featuring an hourly community bank-focused message on the CBS Spectacular jumbo screen in New York City’s Times Square throughout the holiday season.

The goal of the effort is to capture consumers’ attention and remind them that they have a choice when it comes to their banking relationship, says Chris Lorence, ICBA executive vice president and chief marketing officer.

"The B of A fee hoopla only helped draw attention to the fact that people are growing tired of big box, homogenized, one-size-fits-all banking," Lorence tells Marketing Daily. "Just because you’re in a community and marketing yourself as a 'local' doesn’t make you a community bank."

The Go Local initiative is really just beginning as the group continues to draw attention to the importance of community banks in our financial system and the impact they make, Lorence adds.

The Times Square messaging, which is slated to run until Jan. 1, is part of ICBA’s “Go Local” PR campaign, which launched in early October. The campaign encourages consumers to bank locally with a community. The campaign also encourages consumers to shop and dine locally, drawing attention to the importance of communities strengthening themselves by relying on themselves -- and not big-box, one-size-fits-all banking and corporate conglomerates.

Bank Transfer Day was a Facebook event aimed at getting consumers to close their big bank accounts on Nov. 5 and transfer them to community banks and co-ops. The impetus for the event was an announcement by Bank of America that it was considering a monthly fee for debit card users. The bank has since abandoned plans to begin charging the fee.