Restaurants, C-Stores Interchangeable For Many 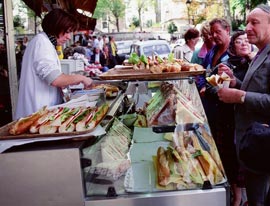 As convenience stores continue to expand their meal and snack offerings, more consumers are using c-stores and quick-serve restaurants interchangeably, according to findings in a new report on convenience store shopper insights from foodservice consultancy Technomic.

More than one-quarter (27%) of consumers surveyed about their most recent convenience-store foodservice purchase indicated that if they had not bought their meal from the convenience store, they would have purchased it from a fast-food restaurant.

A nearly identical percentage said they would have purchased the food from another c store.

"Convenience stores are increasingly falling into the same consideration set as fast-food restaurants," says Technomic Director Tim Powell. "This really speaks to the enhanced foodservice offerings in convenience stores, as well as to evolving consumer behaviors.”

In addition, one in four consumers (again, 27%) said they purchased an afternoon snack during their most recent visit to a convenience store, and 19% reported purchasing lunch. Nearly one-quarter (23%) also indicated that they bought a beverage.

Nearly one-third (31%) of c-store foodservice consumers said that seeing an item, which triggered a craving, was the primary purchase motivator.